Chronotherapy with low-dose modified-release prednisone for the management of rheumatoid arthritis: a review 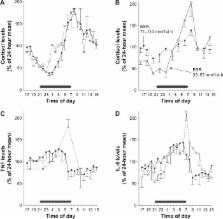 To date, rheumatoid arthritis (RA) remains a debilitating, life-threatening disease. One major concern is morning symptoms (MS), as they considerably impair the patients’ quality of life and ability to work. MS change in a circadian fashion, resembling the fluctuations of inflammatory cytokines such as interleukin-6, whose levels are higher in RA patients compared to healthy donors. Conversely, serum levels of the potent anti-inflammatory glucocorticoid cortisol are similar to that of healthy subjects, suggesting an imbalance that sustains a pro-inflammatory state. From a therapeutic point of view, administering synthetic glucocorticoids (GCs) to RA patients represents an optimal strategy to provide for the inadequate levels of cortisol. Indeed, due to their high efficacy in RA, GCs remain a cornerstone more than 60 years after their first introduction, and despite the development of a wide range of targeted agents. However, to improve safety, low-dose GCs have been introduced, that have demonstrated high efficacy in reducing disease activity, radiological progression, and improving patients’ signs and symptoms especially in early RA when added to conventional disease-modifying antirheumatic drugs. A further improvement has been provided by the development of modified-release prednisone, which, by taking advantage of the circadian fluctuations of inflammatory cytokines, cortisol and MS, is given at bedtime to be released approximately 4 hours later. Several studies have already demonstrated the efficacy of this agent on disease activity, MS, and quality of life in the setting of established RA. Moreover, preliminary studies have shown that this new formulation not only has no impact on the adrenal function, but likely improves it. This review is a comprehensive, updated summary of the current evidence on the use of GCs in RA, with focus on the efficacy and safety of low-dose prednisone and modified-release prednisone, the latter representing a rational, cost-effective, and tailored approach to maximize the benefit/risk ratio in RA patients.

Werner Scheithauer,  Arie Figer,  Eduardo Díaz-Rubio … (2008)
To evaluate whether capecitabine plus oxaliplatin (XELOX) is noninferior to fluorouracil. folinic acid, and oxaliplatin (FOLFOX-4) as first-line therapy in metastatic colorectal cancer (MCRC). The initial design of this trial was a randomized, two-arm, noninferiority, phase III comparison of XELOX versus FOLFOX-4. After patient accrual had begun, the trial design was amended in 2003 after bevacizumab phase III data became available. The resulting 2 x 2 factorial design randomly assigned patients to XELOX versus FOLFOX-4, and then to also receive either bevacizumab or placebo. We report here the results of the analysis of the XELOX versus FOLFOX-4 arms. The analysis of bevacizumab versus placebo with oxaliplatin-based chemotherapy is reported separately. The prespecified primary end point for the noninferiority analysis was progression-free survival. The intent-to-treat population comprised 634 patients from the original two-arm portion of the study, plus an additional 1,400 patients after the start of the amended 2 x 2 design, for a total of 2,034 patients. The median PFS was 8.0 months in the pooled XELOX-containing arms versus 8.5 months in the FOLFOX-4-containing arms (hazard ratio [HR], 1.04; 97.5% CI, 0.93 to 1.16). The median overall survival was 19.8 months with XELOX versus 19.6 months with FOLFOX-4 (HR, 0.99; 97.5% CI, 0.88 to 1.12). FOLFOX-4 was associated with more grade 3/4 neutropenia/granulocytopenia and febrile neutropenia than XELOX, and XELOX with more grade 3 diarrhea and grade 3 hand-foot syndrome than FOLFOX-4. XELOX is noninferior to FOLFOX-4 as a first-line treatment for MCRC, and may be considered as a routine treatment option for appropriate patients.

Harrie Verhoeven,  Pieter Jacobs,  H Schouten … (1997)
The value of intensive combination therapy in early rheumatoid arthritis is unproven. In a multicentre, double-blind, randomised trial (COBRA), we compared the combination of sulphasalazine (2 g/day), methotrexate (7.5 mg/week), and prednisolone (initially 60 mg/day, tapered in 6 weekly steps to 7.5 mg/day) with sulphasalazine alone. 155 patients with early rheumatoid arthritis (median duration 4 months) were randomly assigned combined treatment (76) or sulphasalazine alone (79). Prednisolone and methotrexate were tapered and stopped after 28 and 40 weeks, respectively. The main outcomes were the pooled index (a weighted change score of five disease activity measures) and the Sharp/Van der Heijde radiographic damage score in hands and feet. Independent health-care professionals assessed the main outcomes without knowledge of treatment allocation. At week 28, the mean pooled index was 1.4 (95% CI 1.2-1.6) in the combined treatment group and 0.8 (0.6-1.0) in the sulphasalazine group (p < 0.0001). At this time, 55 (72%) and 39 (49%) patients, respectively, were improved according to American College of Rheumatology criteria. The clinical difference between the groups decreased and was no longer significant after prednisolone was stopped, and there were no further changes after methotrexate was stopped. At 28 weeks, the radiographic damage score had increased by a median of 1 (range 0-28) in the combined-therapy group and 4 (0-44) in the sulphasalazine group (p < 0.0001). The increases at week 56 (2 [0-43] vs 6 [0-54], p = 0.004), and at week 80 (4 [0-80] vs 12 [0-72], p = 0.01) were also significant. Further analysis suggests that combined therapy immediately suppressed damage progression, whereas sulphasalazine did so less effectively and with a lag of 6 to 12 months. There were fewer withdrawals in the combined therapy than the sulphasalazine group (6 [8%] vs 23 [29%]), and they occurred later. This combined-therapy regimen offers additional disease control over and above that of sulphasalazine alone that persists for up to a year after corticosteroids are stopped. Although confirmatory studies and long-term follow-up are needed, this approach may prove useful in the treatment of early rheumatoid arthritis.

Efficacy of modified-release versus standard prednisone to reduce duration of morning stiffness of the joints in rheumatoid arthritis (CAPRA-1): a double-blind, randomised controlled trial.