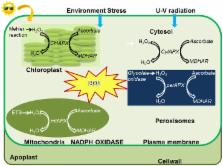 One of the most significant manifestations of environmental stress in plants is the increased production of Reactive Oxygen Species (ROS). These ROS, if allowed to accumulate unchecked, can lead to cellular toxicity. A battery of antioxidant molecules is present in plants for keeping ROS levels under check and to maintain the cellular homeostasis under stress. Ascorbate peroxidase (APX) is a key antioxidant enzyme of such scavenging systems. It catalyses the conversion of H 2O 2 into H 2O, employing ascorbate as an electron donor. The expression of APX is differentially regulated in response to environmental stresses and during normal plant growth and development as well. Different isoforms of APX show differential response to environmental stresses, depending upon their sub-cellular localization, and the presence of specific regulatory elements in the upstream regions of the respective genes. The present review delineates role of APX isoforms with respect to different types of abiotic stresses and its importance as a key antioxidant enzyme in maintaining cellular homeostasis.

Viswanathan Chinnusamy,  Jian Zhu (2009)
Gene expression driven by developmental and stress cues often depends on nucleosome histone post-translational modifications and sometimes on DNA methylation. A number of studies have shown that these DNA and histone modifications play a key role in gene expression and plant development under stress. Most of these stress-induced modifications are reset to the basal level once the stress is relieved, while some of the modifications may be stable, that is, may be carried forward as 'stress memory' and may be inherited across mitotic or even meiotic cell divisions. Epigenetic stress memory may help plants more effectively cope with subsequent stresses. Comparative studies on stress-responsive epigenomes and transcriptomes will enhance our understanding of stress adaptation of plants.

Y Miyagawa,  Takahiro Ishikawa,  Yukinori Yabuta … (2002)
Even under optimal conditions, many metabolic processes, including the chloroplastic, mitochondrial, and plasma membrane-linked electron transport systems of higher plants, produce active oxygen species (AOS). Furthermore, the imposition of biotic and abiotic stress conditions can give rise to excess concentrations of AOS, resulting in oxidative damage at the cellular level. Therefore, antioxidants and antioxidant enzymes function to interrupt the cascades of uncontrolled oxidation in each organelle. Ascorbate peroxidase (APX) exists as isoenzymes and plays an important role in the metabolism of H(2)O(2) in higher plants. APX is also found in eukaryotic algae. The characterization of APX isoenzymes and the sequence analysis of their clones have led to a number of investigations that have yielded interesting and novel information on these enzymes. Interestingly, APX isoenzymes of chloroplasts in higher plants are encoded by only one gene, and their mRNAs are generated by alternative splicing of the gene's two 3'-terminal exons. Manipulation of the expression of the enzymes involved in the AOS-scavenging systems by gene-transfer technology has provided a powerful tool for increasing the present understanding of the potential of the defence network against oxidative damage caused by environmental stresses. Transgenic plants expressing E. coli catalase to chloroplasts with increased tolerance to oxidative stress indicate that AOS-scavenging enzymes, especially chloroplastic APX isoenzymes are sensitive under oxidative stress conditions. It is clear that a high level of endogenous ascorbate is essential effectively to maintain the antioxidant system that protects plants from oxidative damage due to biotic and abiotic stresses.