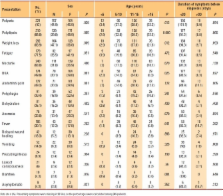 Diabetes mellitus (DM) is a major health problem worldwide. This study aimed to investigate the pattern of presentation and complications of pediatric diabetes.

Retrospective study of children treated at a diabetes clinic at a university hospitalfor diabetes over 12-year period.

We collected data on the age at onset, sex, clinical presentation, duration of symptoms before diagnosis, and partial remission rate that were obtained from the hospital medical records, the National Diabetes Registry, and the statistics department.

The pattern of presentation of type 1 diabetes has changed as the incidence of DKA has decreased; unlike in previous studies, DKA was not the most common presenting symptom in this study. Chronic complications of diabetes, such as retinopathy, neuropathy, coronary heart disease, and nephropathy are mostly rare but still present. These complications might be prevented by achieving better awareness of the need for glycemic control.

Paul Zimmet,  P Zimmet,  K Alberti (1998)
The classification of diabetes mellitus and the tests used for its diagnosis were brought into order by the National Diabetes Data Group of the USA and the second World Health Organization Expert Committee on Diabetes Mellitus in 1979 and 1980. Apart from minor modifications by WHO in 1985, little has been changed since that time. There is however considerable new knowledge regarding the aetiology of different forms of diabetes as well as more information on the predictive value of different blood glucose values for the complications of diabetes. A WHO Consultation has therefore taken place in parallel with a report by an American Diabetes Association Expert Committee to re-examine diagnostic criteria and classification. The present document includes the conclusions of the former and is intended for wide distribution and discussion before final proposals are submitted to WHO for approval. The main changes proposed are as follows. The diagnostic fasting plasma (blood) glucose value has been lowered to > or =7.0 mmol l(-1) (6.1 mmol l(-1)). Impaired Glucose Tolerance (IGT) is changed to allow for the new fasting level. A new category of Impaired Fasting Glycaemia (IFG) is proposed to encompass values which are above normal but below the diagnostic cut-off for diabetes (plasma > or =6.1 to or =5.6 to <6.1 mmol l(-1)). Gestational Diabetes Mellitus (GDM) now includes gestational impaired glucose tolerance as well as the previous GDM. The classification defines both process and stage of the disease. The processes include Type 1, autoimmune and non-autoimmune, with beta-cell destruction; Type 2 with varying degrees of insulin resistance and insulin hyposecretion; Gestational Diabetes Mellitus; and Other Types where the cause is known (e.g. MODY, endocrinopathies). It is anticipated that this group will expand as causes of Type 2 become known. Stages range from normoglycaemia to insulin required for survival. It is hoped that the new classification will allow better classification of individuals and lead to fewer therapeutic misjudgements.

The rising global burden of diabetes and its complications: estimates and projections to the year 2010.

P Zimmet,  Sarah-Beth Amos,  D McCarty (1996)
Prevention and control programmes are needed to stem the rising epidemic of diabetes and its complications. However, these will not occur unless governments and public health planners are aware of the potential problem. Using published prevalence rates for NIDDM in different populations, and the current and projected age distributions, worldwide prevalence of NIDDM was estimated for 1995 and 1997, and well as projections for 2000 and 2010. Prevalence rates used for projections were chosen to reflect changes in lifestyle with economic development. The global prevalence of IDDM was estimated using published incidence rates and population figures, incorporating the likely survival time from development of IDDM. Data on diabetes complications are also summarised but no attempt has been made to extrapolate to a global estimated. In 1997, an estimated 124 million people worldwide have diabetes, 97% of these having NIDDM. By the year 2010 the total number of people with diabetes is projected to reach 221 million. The regions with the greatest potential increases are Asia and Africa, where diabetes rates could rise to 2 or 3 times those experienced today. With improvements in the treatment of IDDM, the prevalence of this form of diabetes is likely to increase as more people survive for longer after diagnosis. Increases in complications will undoubtedly follow increasing prevalence of diabetes, but population-based studies using standardised methods of diagnosis are required before reliable estimates of the extent of the problem can be made. It is hoped that the information provided in this report, and others like it, will act as an incentive to initiate or improve local diabetes monitoring and prevention strategies.

The Pittsburgh study of insulin-dependent diabetes mellitus. Risk for diabetes among relatives of IDDM.

R Laporte,  Callum MacGregor,  Frank Wagener … (1982)
AN analysis has been made of the family histories of a survey of 1280 cases of IDDM entering Children's Hospital of Pittsburgh between December 31, 1964 and January 1, 1981, discharged on insulin and initial age of onset under 17 yr. Family histories revealed an increased occurrence of IDDM among relatives in the affected families. The risk to siblings was estimated by age-corrected proband exclusion (3.3%) by age 20 and by the Li-Mantel segregation ratio estimator (6.0%). The comparison of these risk measures is discussed. The occurrence of IDDM among the parents is 2.6% and of NIDDM among the parents is 2.4%. A comparison of risk to relatives (parents, sibs, uncles, half-sibs) observed in the Pittsburgh Study to those of six other studies reveal essentially equivalent rates. There is no increased risk to siblings of a diabetic who had an early age of onset. There is an increased risk to siblings of a diabetic (10.5%) in families where at least one parent has insulin-dependent diabetes mellitus (IDDM) and also an increased risk to siblings of a diabetic (8.8%) when at least one parent has non-insulin-dependent diabetes (NIDDM). The average age of onset for second cases in a family is significantly older than age of onset in single case families.