Climate structuring of Batrachochytrium dendrobatidis infection in the threatened amphibians of the northern Western Ghats, India 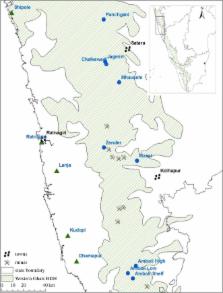 Batrachochytrium dendrobatidis ( Bd) is a pathogen killing amphibians worldwide. Its impact across much of Asia is poorly characterized. This study systematically surveyed amphibians for Bd across rocky plateaus in the northern section of the Western Ghats biodiversity hotspot, India, including the first surveys of the plateaus in the coastal region. These ecosystems offer an epidemiological model system since they are characterized by differing levels of connectivity, edaphic and climatic conditions, and anthropogenic stressors. One hundred and eighteen individuals of 21 species of Anura and Apoda on 13 plateaus ranging from 67 to 1179 m above sea level and 15.89 to 17.92° North latitude were sampled. Using qPCR protocols, 79% of species and 27% of individuals tested were positive for Bd. This is the first record of Bd in caecilians in India, the Critically Endangered Xanthophryne tigerina and Endangered Fejervarya cf. sahyadris. Mean site prevalence was 28.15%. Prevalence below the escarpment was 31.2% and 25.4% above. The intensity of infection (GE) showed the reverse pattern. Infection may be related to elevational temperature changes, thermal exclusion, inter-site connectivity and anthropogenic disturbance. Coastal plateaus may be thermal refuges from Bd. Infected amphibians represented a wide range of ecological traits posing interesting questions about transmission routes.

Emerging infectious disease and the loss of biodiversity in a Neotropical amphibian community.

K R Lips,  F Brem,  R Brenes … (2006)
Pathogens rarely cause extinctions of host species, and there are few examples of a pathogen changing species richness and diversity of an ecological community by causing local extinctions across a wide range of species. We report the link between the rapid appearance of a pathogenic chytrid fungus Batrachochytrium dendrobatidis in an amphibian community at El Copé, Panama, and subsequent mass mortality and loss of amphibian biodiversity across eight families of frogs and salamanders. We describe an outbreak of chytridiomycosis in Panama and argue that this infectious disease has played an important role in amphibian population declines. The high virulence and large number of potential hosts of this emerging infectious disease threaten global amphibian diversity.

Global emergence of Batrachochytrium dendrobatidis and amphibian chytridiomycosis in space, time, and host.

Elizabeth M C Fisher,  Trenton W. J. Garner,  Jerome F. Walker (2008)
Batrachochytrium dendrobatidis (Bd) is a chytrid fungus that causes chytridiomycosis in amphibians. Only named in 1999, Bd is a proximate driver of declines in global amphibian biodiversity. The pathogen infects over 350 species of amphibians and is found on all continents except Antarctica. However, the processes that have led to the global distribution of Bd and the occurrence of chytridiomycosis remain unclear. This review explores the molecular, epidemiological, and ecological evidence that Bd evolved from an endemic ancestral lineage to achieve global prominence via anthropogenically mediated spread. We then consider the major host and pathogen factors that have led to the occurrence of chytridiomycosis in amphibian species, populations, and communities.