Identification of barriers to insulin therapy and approaches to overcoming them 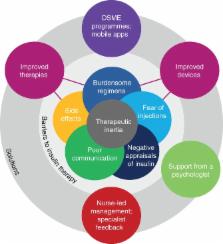 Poor glycaemic control in type 2 diabetes (T2D) is a global problem despite the availability of numerous glucose‐lowering therapies and clear guidelines for T2D management. Tackling clinical or therapeutic inertia, where the person with diabetes and/or their healthcare providers do not intensify treatment regimens despite this being appropriate, is key to improving patients’ long‐term outcomes. This gap between best practice and current level of care is most pronounced when considering insulin regimens, with studies showing that insulin initiation/intensification is frequently and inappropriately delayed for several years. Patient‐ and physician‐related factors both contribute to this resistance at the stages of insulin initiation, titration and intensification, impeding achievement of optimal glycaemic control. The present review evaluates the evidence and reasons for this delay, together with available methods for facilitation of insulin initiation or intensification.

Rury R Holman,  Sanjoy K Paul,  M Angelyn Bethel … (2008)
During the United Kingdom Prospective Diabetes Study (UKPDS), patients with type 2 diabetes mellitus who received intensive glucose therapy had a lower risk of microvascular complications than did those receiving conventional dietary therapy. We conducted post-trial monitoring to determine whether this improved glucose control persisted and whether such therapy had a long-term effect on macrovascular outcomes. Of 5102 patients with newly diagnosed type 2 diabetes, 4209 were randomly assigned to receive either conventional therapy (dietary restriction) or intensive therapy (either sulfonylurea or insulin or, in overweight patients, metformin) for glucose control. In post-trial monitoring, 3277 patients were asked to attend annual UKPDS clinics for 5 years, but no attempts were made to maintain their previously assigned therapies. Annual questionnaires were used to follow patients who were unable to attend the clinics, and all patients in years 6 to 10 were assessed through questionnaires. We examined seven prespecified aggregate clinical outcomes from the UKPDS on an intention-to-treat basis, according to previous randomization categories. Between-group differences in glycated hemoglobin levels were lost after the first year. In the sulfonylurea-insulin group, relative reductions in risk persisted at 10 years for any diabetes-related end point (9%, P=0.04) and microvascular disease (24%, P=0.001), and risk reductions for myocardial infarction (15%, P=0.01) and death from any cause (13%, P=0.007) emerged over time, as more events occurred. In the metformin group, significant risk reductions persisted for any diabetes-related end point (21%, P=0.01), myocardial infarction (33%, P=0.005), and death from any cause (27%, P=0.002). Despite an early loss of glycemic differences, a continued reduction in microvascular risk and emergent risk reductions for myocardial infarction and death from any cause were observed during 10 years of post-trial follow-up. A continued benefit after metformin therapy was evident among overweight patients. (UKPDS 80; Current Controlled Trials number, ISRCTN75451837.) 2008 Massachusetts Medical Society

Desley Neil,  Steffen Adler,  S Manley … (2000)
To determine the relation between exposure to glycaemia over time and the risk of macrovascular or microvascular complications in patients with type 2 diabetes. Prospective observational study. 23 hospital based clinics in England, Scotland, and Northern Ireland. 4585 white, Asian Indian, and Afro-Caribbean UKPDS patients, whether randomised or not to treatment, were included in analyses of incidence; of these, 3642 were included in analyses of relative risk. Primary predefined aggregate clinical outcomes: any end point or deaths related to diabetes and all cause mortality. Secondary aggregate outcomes: myocardial infarction, stroke, amputation (including death from peripheral vascular disease), and microvascular disease (predominantly retinal photo-coagulation). Single end points: non-fatal heart failure and cataract extraction. Risk reduction associated with a 1% reduction in updated mean HbA(1c) adjusted for possible confounders at diagnosis of diabetes. The incidence of clinical complications was significantly associated with glycaemia. Each 1% reduction in updated mean HbA(1c) was associated with reductions in risk of 21% for any end point related to diabetes (95% confidence interval 17% to 24%, P<0.0001), 21% for deaths related to diabetes (15% to 27%, P<0.0001), 14% for myocardial infarction (8% to 21%, P<0.0001), and 37% for microvascular complications (33% to 41%, P<0.0001). No threshold of risk was observed for any end point. In patients with type 2 diabetes the risk of diabetic complications was strongly associated with previous hyperglycaemia. Any reduction in HbA(1c) is likely to reduce the risk of complications, with the lowest risk being in those with HbA(1c) values in the normal range (<6.0%).

A systematic review of adherence with medications for diabetes.

Robert Cramer (2004)
The purpose of this study was to determine the extent to which patients omit doses of medications prescribed for diabetes. A literature search (1966-2003) was performed to identify reports with quantitative data on adherence with oral hypoglycemic agents (OHAs) and insulin and correlations between adherence rates and glycemic control. Adequate documentation of adherence was found in 15 retrospective studies of OHA prescription refill rates, 5 prospective electronic monitoring OHA studies, and 3 retrospective insulin studies. Retrospective analyses showed that adherence to OHA therapy ranged from 36 to 93% in patients remaining on treatment for 6-24 months. Prospective electronic monitoring studies documented that patients took 67-85% of OHA doses as prescribed. Electronic monitoring identified poor compliers for interventions that improved adherence (61-79%; P < 0.05). Young patients filled prescriptions for one-third of prescribed insulin doses. Insulin adherence among patients with type 2 diabetes was 62-64%. This review confirms that many patients for whom diabetes medication was prescribed were poor compliers with treatment, including both OHAs and insulin. However, electronic monitoring systems were useful in improving adherence for individual patients. Similar electronic monitoring systems for insulin administration could help healthcare providers determine patients needing additional support.