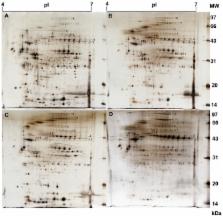 Thermotoga maritima ( T. maritima) is a typical thermophile, and its proteome response to environmental temperature changes has yet to be explored. This study aims to uncover the temperature-dependent proteins of T. maritima using comparative proteomic approach. T. maritima was cultured under four temperatures, 60°C, 70°C, 80°C and 90°C, and the bacterial proteins were extracted and electrophoresed in two-dimensional mode. After analysis of gel images, a total of 224 spots, either cytoplasm or membrane, were defined as temperature-dependent. Of these spots, 75 unique bacterial proteins were identified using MALDI TOF/TOF MS. As is well known, the chaperone proteins such as heat shock protein 60 and elongation factor Tu, were up-regulated in abundance due to increased temperature. However, several temperature-dependent proteins of T. maritima responded very differently when compared to responses of the thermophile T. tengcongensis. Intriguingly, a number of proteins involved in central carbohydrate metabolism were significantly up-regulated at higher temperature. Their corresponding mRNA levels were elevated accordingly. The increase in abundance of several key enzymes indicates that a number of central carbohydrate metabolism pathways of T. maritima are activated at higher temperatures.

Evidence for lateral gene transfer between Archaea and bacteria from genome sequence of Thermotoga maritima.

D. Haft,  R Clayton,  T Utterback … (1999)
The 1,860,725-base-pair genome of Thermotoga maritima MSB8 contains 1,877 predicted coding regions, 1,014 (54%) of which have functional assignments and 863 (46%) of which are of unknown function. Genome analysis reveals numerous pathways involved in degradation of sugars and plant polysaccharides, and 108 genes that have orthologues only in the genomes of other thermophilic Eubacteria and Archaea. Of the Eubacteria sequenced to date, T. maritima has the highest percentage (24%) of genes that are most similar to archaeal genes. Eighty-one archaeal-like genes are clustered in 15 regions of the T. maritima genome that range in size from 4 to 20 kilobases. Conservation of gene order between T. maritima and Archaea in many of the clustered regions suggests that lateral gene transfer may have occurred between thermophilic Eubacteria and Archaea.

Irimpan Mathews,  Linda S. Brinen,  Glen Spraggon … (2002)
Structural genomics is emerging as a principal approach to define protein structure-function relationships. To apply this approach on a genomic scale, novel methods and technologies must be developed to determine large numbers of structures. We describe the design and implementation of a high-throughput structural genomics pipeline and its application to the proteome of the thermophilic bacterium Thermotoga maritima. By using this pipeline, we successfully cloned and attempted expression of 1,376 of the predicted 1,877 genes (73%) and have identified crystallization conditions for 432 proteins, comprising 23% of the T. maritima proteome. Representative structures from TM0423 glycerol dehydrogenase and TM0449 thymidylate synthase-complementing protein are presented as examples of final outputs from the pipeline.

D Ussery,  T. Nelson,  Jens-Erik B Jensen … (2000)
The recently published complete DNA sequence of the bacterium Thermotoga maritima provides evidence, based on protein sequence conservation, for lateral gene transfer between Archaea and Bacteria. We introduce a new method of periodicity analysis of DNA sequences, based on structural parameters, which brings independent evidence for the lateral gene transfer in the genome of T.maritima. The structural analysis relates the Archaea-like DNA sequences to the genome of Pyrococcus horikoshii. Analysis of 24 complete genomic DNA sequences shows different periodicity patterns for organisms of different origin. The typical genomic periodicity for Bacteria is 11 bp whilst it is 10 bp for Archaea. Eukaryotes have more complex spectra but the dominant period in the yeast Saccharomyces cerevisiae is 10.2 bp. These periodicities are most likely reflective of differences in chromatin structure.

The work was supported by the grants of the National Basic Research Program of China (2010CB912703) (2007CB707801) and the National Natural Science Foundation of China (30770467). The funders had no role in study design, data collection and analysis, decision to publish, or preparation of the manuscript.