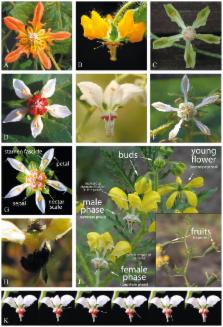 Stamen movements can be understood as a mechanism influencing pollen presentation and increasing outbreeding success of hermaphroditic flowers via optimized male function. In this study we experimentally analyzed the factors regulating autonomous and thigmonastic (triggered by flower visitors) stamen movements in eight species of Loasaceae. Both types of stamen movements are positively influenced by light and temperature and come to a virtual standstill in the dark and at low temperatures (12°C). Pollen presentation is thus discontinued during periods where pollinators are not active. Overall stamen presentation increases with increasing flower age. Contrary to expectation, no geometrical correlation between the floral scale stimulated and the stamen fascicle reacting exists, indicating that the stimulus is transmitted over the receptacle and stamen maturation dictates which and how many stamens react. Thigmonastic stamen presentation is dramatically accelerated compared to autonomous movement (3–37 times), indicating that the rate of stamen maturation can be adjusted to different visitation schedules. Flowers can react relatively uniformly down to stimulation intervals of 10–15 min., consistently presenting comparable numbers of stamens in the flower c. 5 min. after the stimulus and can thus keep the amount of pollen presented relatively constant even under very high visitation frequencies of 4–6 visits/h. Thigmonastic pollen presentation dramatically reduces the overall duration of the staminate phase (to 1/3 rd in Nasa macrothyrsa). Similarly, the carpellate phase is dramatically reduced after pollination, down to 1 d from 4 d. Overall flower longevity is reduced by more than 2/3 rds under high visitation rates (<3 d versus 10 d under visitor exclusion) and depleted and pollinated flowers are rapidly removed from the pool. Complex floral behaviour in Loasaceae thus permits a near-total control over pollen dispensation schedules and floral longevity of the individual flower by an extraordinary fine-tuning to both biotic and abiotic factors.

Janet Braam (2005)
Perception and response to mechanical stimuli are likely essential at the cellular and organismal levels. Elaborate and impressive touch responses of plants capture the imagination as such behaviors are unexpected in otherwise often quiescent creatures. Touch responses can turn plants into aggressors against animals, trapping and devouring them, and enable flowers to be active in ensuring crosspollination and shoots to climb to sunlit heights. Morphogenesis is also influenced by mechanical perturbations, including both dynamic environmental stimuli, such as wind, and constant forces, such as gravity. Even individual cells must sense turgor and wall integrity, and subcellular organelles can translocate in response to mechanical perturbations. Signaling molecules and hormones, including intracellular calcium, reactive oxygen species, octadecanoids and ethylene, have been implicated in touch responses. Remarkably, touch-induced gene expression is widespread; more than 2.5% of Arabidopsis genes are rapidly up-regulated in touch-stimulated plants. Many of these genes encode calcium-binding, cell wall modifying, defense, transcription factor and kinase proteins. With these genes as tools, molecular genetic methods may enable elucidation of mechanisms of touch perception, signal transduction and response regulation.

The importance of the natural sciences to conservation: (an American Society of Naturalists symposium paper).

P Dayton (2003)
The last century has seen enormous environmental degradation: many populations are in drastic decline, and their ecosystems have been vastly altered. There is an urgent need to understand the causes of the decline, how the species interact with other components of the environment, and how ecosystem integrity is determined. A brief review of marine systems emphasizes the importance of natural sciences to understanding the systems and finding solutions. These environmental crises coincide with the virtual banishment of natural sciences in academe, which eliminate the opportunity for both young scientists and the general public to learn the fundamentals that help us predict population levels and the responses by complex systems to environmental variation. Science and management demands that complex systems be simplified, but the art of appropriate simplification depends on a basic understanding of the important natural history. It seems unlikely that meaningful conservation and restoration can be accomplished unless we recover the tradition of supporting research in and the teaching of natural history. We must reinstate natural science courses in all our academic institutions to insure that students experience nature first-hand and are instructed in the fundamentals of the natural sciences.

Lack of floral nectar reduces self-pollination in a fly-pollinated orchid.

Jana Jersáková,  Michael D L Johnson (2006)
One explanation for the widespread absence of floral nectar in many orchids is that it causes pollinators to visit fewer flowers on a plant, and thus reduces self-pollination. This, in turn, could increase fitness by reducing inbreeding depression in progeny and promoting pollen export. The few previous investigations of this hypothesis have all involved bee-pollinated orchids and some have given contradictory results. We studied the effects of adding artificial nectar (sucrose solution) to the spurs of a non-rewarding long-proboscid fly-pollinated orchid, Disa pulchra. Addition of nectar significantly increased the number of flowers probed by flies (2.6-fold), the time spent on a flower (5.4-fold), the number of pollinia removed per inflorescence (4.8-fold) and the proportion of removed pollen involved in self-pollination (3.5-fold). The level of self-pollination increased dramatically with the number of flowers probed by flies. Experimental self-pollination resulted in fruits with only half as many viable seeds as those arising from cross-pollination. Pollinators were more likely to fly long distances (>40 cm) when departing from non-rewarding inflorescences than when departing from rewarding ones. These findings provide support for the idea that floral deception serves to reduce pollinator-mediated self-pollination.

Competing Interests: Botconsult gmbH has financially supported the study indirectly by paying the travel expenses. This has been done in order to obtain data for a completely independent sustainability study on Krameria lappaceae. This does not alter the authors' adherence to all the PLoS ONE policies on sharing data and materials.

Funds provided by NaFöG (Elsa Neumann Stipendium des Landes Berlin, http://www.fu-berlin.de/en/forschung/service/foerderung/nachwuchsfoerder/nachwuchs/nafoeg.html, PhD study of the first author), and botconsult GmbH ( http://www.botconsult.de/) are gratefully acknowledged. The funders had no role in study design, data collection and analysis, decision to publish, or preparation of the manuscript.