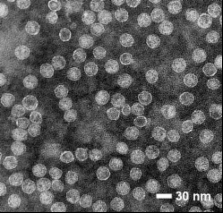 Since its first appearance in the USA in 1999, West Nile virus (WNV) has spread in the Western hemisphere and continues to represent an important public health concern. In the absence of effective treatment, there is a medical need for the development of a safe and efficient vaccine. Live attenuated WNV vaccines have shown promise in preclinical and clinical studies but might carry inherent risks due to the possibility of reversion to more virulent forms. Subunit vaccines based on the large envelope (E) glycoprotein of WNV have therefore been explored as an alternative approach. Although these vaccines were shown to protect from disease in animal models, multiple injections and/or strong adjuvants were required to reach efficacy, underscoring the need for more immunogenic, yet safe DIII-based vaccines.

We produced a conjugate vaccine against WNV consisting of recombinantly expressed domain III (DIII) of the E glycoprotein chemically cross-linked to virus-like particles derived from the recently discovered bacteriophage AP205. In contrast to isolated DIII protein, which required three administrations to induce detectable antibody titers in mice, high titers of DIII-specific antibodies were induced after a single injection of the conjugate vaccine. These antibodies were able to neutralize the virus in vitro and provided partial protection from a challenge with a lethal dose of WNV. Three injections of the vaccine induced high titers of virus-neutralizing antibodies, and completely protected mice from WNV infection.

The immunogenicity of DIII can be strongly enhanced by conjugation to virus-like particles of the bacteriophage AP205. The superior immunogenicity of the conjugate vaccine with respect to other DIII-based subunit vaccines, its anticipated favourable safety profile and low production costs highlight its potential as an efficacious and cost-effective prophylaxis against WNV.

Theodore Oliphant,  Michael Engle,  Grant Nybakken … (2005)
Neutralization of West Nile virus (WNV) in vivo correlates with the development of an antibody response against the viral envelope (E) protein. Using random mutagenesis and yeast surface display, we defined individual contact residues of 14 newly generated monoclonal antibodies against domain III of the WNV E protein. Monoclonal antibodies that strongly neutralized WNV localized to a surface patch on the lateral face of domain III. Convalescent antibodies from individuals who had recovered from WNV infection also detected this epitope. One monoclonal antibody, E16, neutralized 10 different strains in vitro, and showed therapeutic efficacy in mice, even when administered as a single dose 5 d after infection. A humanized version of E16 was generated that retained antigen specificity, avidity and neutralizing activity. In postexposure therapeutic trials in mice, a single dose of humanized E16 protected mice against WNV-induced mortality, and may therefore be a viable treatment option against WNV infection in humans. Supplementary information The online version of this article (doi:10.1038/nm1240) contains supplementary material, which is available to authorized users.

The influence of antigen organization on B cell responsiveness.

H Hengartner,  R M Zinkernagel,  Lucas Bachmann … (1993)
The influence of antigen epitope density and order on B cell induction and antibody production was assessed with the glycoprotein of vesicular stomatitis virus serotype Indiana [VSV-G (IND)]. VSV-G (IND) can be found in a highly repetitive form the envelope of VSV-IND and in a poorly organized form on the surface of infected cells. In VSV-G (IND) transgenic mice, B cells were unresponsive to the poorly organized VSV-G (IND) present as self antigen but responded promptly to the same antigen presented in the highly organized form. Thus, antigen organization influences B cell tolerance.

William G. Glass,  David McDermott,  Jean Lim … (2006)
West Nile virus (WNV) is a reemerging pathogen that causes fatal encephalitis in several species, including mouse and human. Recently, we showed that the chemokine receptor CCR5 is critical for survival of mice infected with WNV, acting at the level of leukocyte trafficking to the brain. To test whether this receptor is also protective in man, we determined the frequency of CCR5Δ32, a defective CCR5 allele found predominantly in Caucasians, in two independent cohorts of patients, one from Arizona and the other from Colorado, who had laboratory-confirmed, symptomatic WNV infection. The distribution of CCR5Δ32 in a control population of healthy United States Caucasian random blood donors was in Hardy-Weinberg equilibrium and CCR5Δ32 homozygotes represented 1.0% of the total group (n = 1,318). In contrast, CCR5Δ32 homozygotes represented 4.2% of Caucasians in the Arizona cohort (odds ratios [OR] = 4.4 [95% confidence interval [CI], 1.6–11.8], P = 0.0013) and 8.3% of Caucasians in the Colorado cohort (OR = 9.1 [95% CI, 3.4–24.8], P < 0.0001). CCR5Δ32 homozygosity was significantly associated with fatal outcome in the Arizona cohort (OR = 13.2 [95% CI, 1.9–89.9], P = 0.03). We conclude that CCR5 mediates resistance to symptomatic WNV infection. Because CCR5 is also the major HIV coreceptor, these findings have important implications for the safety of CCR5-blocking agents under development for HIV/AIDS.