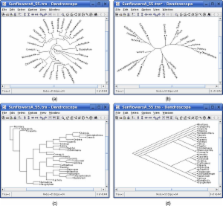 Research in evolution requires software for visualizing and editing phylogenetic trees, for increasingly very large datasets, such as arise in expression analysis or metagenomics, for example. It would be desirable to have a program that provides these services in an effcient and user-friendly way, and that can be easily installed and run on all major operating systems. Although a large number of tree visualization tools are freely available, some as a part of more comprehensive analysis packages, all have drawbacks in one or more domains. They either lack some of the standard tree visualization techniques or basic graphics and editing features, or they are restricted to small trees containing only tens of thousands of taxa. Moreover, many programs are diffcult to install or are not available for all common operating systems.

We have developed a new program, Dendroscope, for the interactive visualization and navigation of phylogenetic trees. The program provides all standard tree visualizations and is optimized to run interactively on trees containing hundreds of thousands of taxa. The program provides tree editing and graphics export capabilities. To support the inspection of large trees, Dendroscope offers a magnification tool. The software is written in Java 1.4 and installers are provided for Linux/Unix, MacOS X and Windows XP.

Dendroscope is a user-friendly program for visualizing and navigating phylogenetic trees, for both small and large datasets.

S. KUMAR (2004)
With its theoretical basis firmly established in molecular evolutionary and population genetics, the comparative DNA and protein sequence analysis plays a central role in reconstructing the evolutionary histories of species and multigene families, estimating rates of molecular evolution, and inferring the nature and extent of selective forces shaping the evolution of genes and genomes. The scope of these investigations has now expanded greatly owing to the development of high-throughput sequencing techniques and novel statistical and computational methods. These methods require easy-to-use computer programs. One such effort has been to produce Molecular Evolutionary Genetics Analysis (MEGA) software, with its focus on facilitating the exploration and analysis of the DNA and protein sequence variation from an evolutionary perspective. Currently in its third major release, MEGA3 contains facilities for automatic and manual sequence alignment, web-based mining of databases, inference of the phylogenetic trees, estimation of evolutionary distances and testing evolutionary hypotheses. This paper provides an overview of the statistical methods, computational tools, and visual exploration modules for data input and the results obtainable in MEGA.

C. M. Zmasek,  S. Eddy (2001)
A Tree Viewer (ATV) is a Java tool for the display and manipulation of annotated phylogenetic trees. It can be utilized both as a standalone application and as an applet in a web browser.