Recent Advances and Uses of Grape Flavonoids as Nutraceuticals 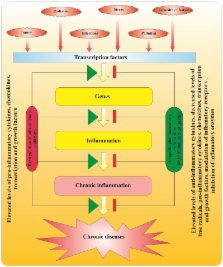 Grape is one of the oldest fruit crops domesticated by humans. The numerous uses of grape in making wine, beverages, jelly, and other products, has made it one of the most economically important plants worldwide. The complex phytochemistry of the berry is characterized by a wide variety of compounds, most of which have been demonstrated to have therapeutic or health promoting properties. Among them, flavonoids are the most abundant and widely studied, and have enjoyed greater attention among grape researchers in the last century. Recent studies have shown that the beneficial health effects promoted by consumption of grape and grape products are attributed to the unique mix of polyphenolic compounds. As the largest group of grape polyphenols, flavonoids are the main candidates considered to have biological properties, including but not limited to antioxidant, anti-inflammatory, anti-cancer, antimicrobial, antiviral, cardioprotective, neuroprotective, and hepatoprotective activities. Here, we discuss the recent scientific advances supporting the beneficial health qualities of grape and grape-derived products, mechanisms of their biological activity, bioavailability, and their uses as nutraceuticals. The advantages of modern plant cell based biotechnology as an alternative method for production of grape nutraceuticals and improvement of their health qualities are also discussed.

Pier-Giorgio Pietta (2000)
Flavonoids are phenolic substances isolated from a wide range of vascular plants, with over 8000 individual compounds known. They act in plants as antioxidants, antimicrobials, photoreceptors, visual attractors, feeding repellants, and for light screening. Many studies have suggested that flavonoids exhibit biological activities, including antiallergenic, antiviral, antiinflammatory, and vasodilating actions. However, most interest has been devoted to the antioxidant activity of flavonoids, which is due to their ability to reduce free radical formation and to scavenge free radicals. The capacity of flavonoids to act as antioxidants in vitro has been the subject of several studies in the past years, and important structure-activity relationships of the antioxidant activity have been established. The antioxidant efficacy of flavonoids in vivo is less documented, presumably because of the limited knowledge on their uptake in humans. Most ingested flavonoids are extensively degraded to various phenolic acids, some of which still possess a radical-scavenging ability. Both the absorbed flavonoids and their metabolites may display an in vivo antioxidant activity, which is evidenced experimentally by the increase of the plasma antioxidant status, the sparing effect on vitamin E of erythrocyte membranes and low-density lipoproteins, and the preservation of erythrocyte membrane polyunsaturated fatty acids. This review presents the current knowledge on structural aspects and in vitro antioxidant capacity of most common flavonoids as well as in vivo antioxidant activity and effects on endogenous antioxidants.

Charles Dinarello (2000)
To review the concept of proinflammatory cytokines. Review of published literature. Academic (university hospital). Cytokines are regulators of host responses to infection, immune responses, inflammation, and trauma. Some cytokines act to make disease worse (proinflammatory), whereas others serve to reduce inflammation and promote healing (anti-inflammatory). Attention also has focused on blocking cytokines, which are harmful to the host, particularly during overwhelming infection. Interleukin (IL)-1 and tumor necrosis factor (TNF) are proinflammatory cytokines, and when they are administered to humans, they produce fever, inflammation, tissue destruction, and, in some cases, shock and death. Reducing the biological activities of IL-1 and TNF is accomplished by several different, but highly specific, strategies, which involve neutralizing antibodies, soluble receptors, receptor antagonist, and inhibitors of proteases that convert inactive precursors to active, mature molecules. Blocking IL-1 or TNF has been highly successful in patients with rheumatoid arthritis, inflammatory bowel disease, or graft-vs-host disease but distinctly has not been successful in humans with sepsis. Agents such as TNF-neutralizing antibodies, soluble TNF receptors, and IL-1 receptor antagonist have been infused into > 10,000 patients in double-blind, placebo-controlled trials. Although there has been a highly consistent small increase (2 to 3%) in 28-day survival rates with anticytokine therapy, the effect has not been statistically significant. Anticytokine therapy should be able to "rescue" the patient whose condition continues to deteriorate in the face of considerable support efforts. Unfortunately, it remains difficult to identify those patients who would benefit from anticytokine therapy for septic shock.

Inflammation and cancer: how hot is the link?

Santosh K. Sandur,  Gautam Sethi,  Ajay K. Pandey … (2006)
Although inflammation has long been known as a localized protective reaction of tissue to irritation, injury, or infection, characterized by pain, redness, swelling, and sometimes loss of function, there has been a new realization about its role in a wide variety of diseases, including cancer. While acute inflammation is a part of the defense response, chronic inflammation can lead to cancer, diabetes, cardiovascular, pulmonary, and neurological diseases. Several pro-inflammatory gene products have been identified that mediate a critical role in suppression of apoptosis, proliferation, angiogenesis, invasion, and metastasis. Among these gene products are TNF and members of its superfamily, IL-1alpha, IL-1beta, IL-6, IL-8, IL-18, chemokines, MMP-9, VEGF, COX-2, and 5-LOX. The expression of all these genes are mainly regulated by the transcription factor NF-kappaB, which is constitutively active in most tumors and is induced by carcinogens (such as cigarette smoke), tumor promoters, carcinogenic viral proteins (HIV-tat, HIV-nef, HIV-vpr, KHSV, EBV-LMP1, HTLV1-tax, HPV, HCV, and HBV), chemotherapeutic agents, and gamma-irradiation. These observations imply that anti-inflammatory agents that suppress NF-kappaB or NF-kappaB-regulated products should have a potential in both the prevention and treatment of cancer. The current review describes in detail the critical link between inflammation and cancer.