The association of remotely-sensed outdoor temperature with blood pressure levels in REGARDS: a cross-sectional study of a large, national cohort of African-American and white participants 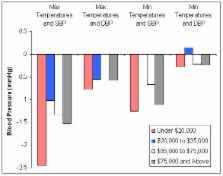 Evidence is mounting regarding the clinically significant effect of temperature on blood pressure.

In this cross-sectional study the authors obtained minimum and maximum temperatures and their respective previous week variances at the geographic locations of the self-reported residences of 26,018 participants from a national cohort of blacks and whites, aged 45+. Linear regression of data from 20,623 participants was used in final multivariable models to determine if these temperature measures were associated with levels of systolic or diastolic blood pressure, and whether these relations were modified by stroke-risk region, race, education, income, sex hypertensive medication status, or age.

The effect of season and weather on physical activity: a systematic review.

A warm heart and a clear head. The contingent effects of weather on mood and cognition.

Amanda Mikels,  Stéphane Côté,  Tor Wager … (2005)
Prior studies on the association between weather and psychological changes have produced mixed results. In part, this inconsistency may be because weather's psychological effects are moderated by two important factors: the season and time spent outside. In two correlational studies and an experiment manipulating participants' time outdoors (total N = 605), pleasant weather (higher temperature or barometric pressure) was related to higher mood, better memory, and "broadened" cognitive style during the spring as time spent outside increased. The same relationships between mood and weather were not observed during other times of year, and indeed hotter weather was associated with lower mood in the summer. These results are consistent with findings on seasonal affective disorder, and suggest that pleasant weather improves mood and broadens cognition in the spring because people have been deprived of such weather during the winter.