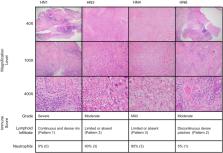 Journal: Modern pathology : an official journal of the United States and Canadian Academy of Pathology, Inc

Asbestos describes a group of naturally occurring fibrous silicate mineral compounds that have been associated with a number of respiratory maladies, including mesothelioma and lung cancer. Additionally, based primarily on epidemiologic studies, asbestos has been implicated as a risk factor for laryngeal and pharyngeal squamous cell carcinoma (SCC). The chief objective of this work was to strengthen existing evidence via empirical demonstration of persistent asbestos fibers embedded in the tissue surrounding laryngeal and pharyngeal SCC, thus providing a more definitive biological link between exposure and disease. Six human papillomavirus (HPV)-negative laryngeal (n = 4) and pharyngeal (n = 2) SCC cases with a history working in an asbestos-exposed occupation were selected from a large population-based case-control study of head and neck cancer. A laryngeal SCC case with no history of occupational asbestos exposure was included as a control. Tissue cores were obtained from adjacent non-neoplastic tissue in tumor blocks from the initial primary tumor resection, and mineral fiber analysis was performed using a scanning electron microscope equipped with an energy dispersive x-ray analyzer (EDXA). Chrysotile asbestos fiber bundles were identified in 3/6 of evaluated cases with a history of occupational asbestos exposure. All 3 cases had tumors originating in the larynx. In addition, a wollastonite fiber of unclear significance was identified one of the HPV-negative pharyngeal SCC cases. No mineral fibers were identified in the adjacent tissue of a case without occupational exposure. The presence of asbestos fibers in epithelial tissue surrounding laryngeal SCC in cases with a history of occupational asbestos exposure adds a key line of physical evidence implicating asbestos as an etiologic factor.

Thomas Nieland,  Michael Pawlita,  Thomas Joos … (2005)
More than 100 different human papillomaviruses (HPVs) can cause proliferative diseases, many of which are malignant, such as cervical cancer. HPV serology is complex because infection and disease lead to distinct type-specific antibody responses. Using bead-based technology, we have developed an assay platform that allows the simultaneous detection of antibodies against up to 100 in situ affinity-purified recombinant HPV proteins. Twenty-seven HPV proteins were expressed as glutathione S-transferase fusion proteins and affinity-purified in one step by incubation of glutathione-displaying beads in bacterial lysate. Spectrally distinct bead sets, each carrying one particular antigen, were mixed, incubated with serum, and differentiated in a flow cytometer-like analyzer (xMAP; Luminex Corp). Antibodies bound to the antigens were detected via fluorescent secondary reagents. We studied 756 sera from 2 case-control studies of cervical cancer. Glutathione S-transferase fusion proteins bound with high affinity to glutathione-displaying beads (Kd = 6.9 x 10(-9) mol/L). The dynamic range of multiplex serology covered 1.5 orders of magnitude, and antibodies were detected at serum dilutions >1:1,000,000. Imprecision (median CV) was < or = 5.4%, and assay reproducibility was high (R2 = 0.97). Results on clinical samples showed high concordance with ELISA (kappa = 0.846), but multiplex serology exhibited increased detection of weak antibody responses. Antibodies to the E6 oncoproteins of the rare HPV types 52 and 58 were associated with cervical cancer (P < 0.001). Multiplex serology enables antibody analyses of large numbers of sera against up to 100 antigens in parallel and has the potential to replace ELISA technology.

The Case for a Global Ban on Asbestos

Joseph LaDou,  Barry Castleman,  Arthur Frank … (2010)
Background All forms of asbestos are now banned in 52 countries. Safer products have replaced many materials that once were made with it. Nonetheless, many countries still use, import, and export asbestos and asbestos-containing products, and in those that have banned other forms of asbestos, the so-called “controlled use” of chrysotile asbestos is often exempted from the ban. In fact, chrysotile has accounted for > 95% of all the asbestos used globally. Objective We examined and evaluated the literature used to support the exemption of chrysotile asbestos from the ban and how its exemption reflects the political and economic influence of the asbestos mining and manufacturing industry. Discussion All forms of asbestos, including chrysotile, are proven human carcinogens. All forms cause malignant mesothelioma and lung and laryngeal cancers, and may cause ovarian, gastrointestinal, and other cancers. No exposure to asbestos is without risk. Illnesses and deaths from asbestos exposure are entirely preventable. Conclusions All countries of the world have an obligation to their citizens to join in the international endeavor to ban the mining, manufacture, and use of all forms of asbestos. An international ban is urgently needed. There is no medical or scientific basis to exempt chrysotile from the worldwide ban of asbestos.