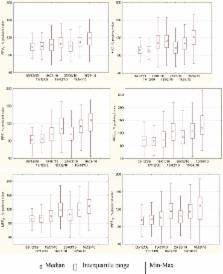 To evaluate lung function responses to short-term indoor PM 1 and PM 2.5 concentrations, we conducted a panel study of healthy schoolchildren aged 13–14 years. The following lung function parameters FVC, FEV 1, PEF, and mid expiratory flows MEF 25, MEF 50, and MEF 75 were measured in 141 schoolchildren of the secondary school in Wroclaw, Poland in years 2009–2010. On days when spirometry tests were conducted, simultaneously, PM 1 and PM 2.5 samples were collected inside the school premises. Information about differentiating factors for children including smoking parents, sex, living close to busy streets, dust, mold, and pollen allergies were collected by means of questionnaires. To account for repeated measurements, the method of generalized estimating equations (GEE) was used. The GEE models for the entire group of children revealed the adverse effects ( p < 0.05) of PM 1 and PM 2.5. Small differences in effects estimates per interquartile range (IQR) of PM 1 and PM 2.5 on MEF 25 (5.1 and 4.8 %), MEF 50 (3.7 and 3.9 %), MEF 75 (3.5 and 3.6 %) and FEV 1 (1.3 and 1.0 %) imply that PM 1 was likely the component of PM 2.5 that might have a principal health effect on these lung function parameters. However, the reduction of FVC and PEF per IQR for PM 2.5 (2.1 and 5.2 %, respectively) was higher than for PM 1 (1.0 and 4.4 %, respectively). Adjustment for potential confounders did not change the unadjusted analysis.

Airborne particulate matter and human health: toxicological assessment and importance of size and composition of particles for oxidative damage and carcinogenic mechanisms.

Athanasios Valavanidis, Konstantinos Fiotakis, Thomais Vlachogianni (2008)
Air pollution has been considered a hazard to human health. In the past decades, many studies highlighted the role of ambient airborne particulate matter (PM) as an important environmental pollutant for many different cardiopulmonary diseases and lung cancer. Numerous epidemiological studies in the past 30 years found a strong exposure-response relationship between PM for short-term effects (premature mortality, hospital admissions) and long-term or cumulative health effects (morbidity, lung cancer, cardiovascular and cardiopulmonary diseases, etc). Current research on airborne particle-induced health effects investigates the critical characteristics of particulate matter that determine their biological effects. Several independent groups of investigators have shown that the size of the airborne particles and their surface area determine the potential to elicit inflammatory injury, oxidative damage, and other biological effects. These effects are stronger for fine and ultrafine particles because they can penetrate deeper into the airways of the respiratory tract and can reach the alveoli in which 50% are retained in the lung parenchyma. Composition of the PM varies greatly and depends on many factors. The major components of PM are transition metals, ions (sulfate, nitrate), organic compound, quinoid stable radicals of carbonaceous material, minerals, reactive gases, and materials of biologic origin. Results from toxicological research have shown that PM have several mechanisms of adverse cellular effects, such as cytotoxicity through oxidative stress mechanisms, oxygen-free radical-generating activity, DNA oxidative damage, mutagenicity, and stimulation of proinflammatory factors. In this review, the results of the most recent epidemiological and toxicological studies are summarized. In general, the evaluation of most of these studies shows that the smaller the size of PM the higher the toxicity through mechanisms of oxidative stress and inflammation. Some studies showed that the extractable organic compounds (a variety of chemicals with mutagenic and cytotoxic properties) contribute to various mechanisms of cytotoxicity; in addition, the water-soluble faction (mainly transition metals with redox potential) play an important role in the initiation of oxidative DNA damage and membrane lipid peroxidation. Associations between chemical compositions and particle toxicity tend to be stronger for the fine and ultrafine PM size fractions. Vehicular exhaust particles are found to be most responsible for small-sized airborne PM air pollution in urban areas. With these aspects in mind, future research should aim at establishing a cleared picture of the cytotoxic and carcinogenic mechanisms of PM in the lungs, as well as mechanisms of formation during internal engine combustion processes and other sources of airborne fine particles of air pollution.

Ulrike Gehring, Olena Gruzieva, Raymond Agius … (2013)
Background: There is evidence for adverse effects of outdoor air pollution on lung function of children. Quantitative summaries of the effects of air pollution on lung function, however, are lacking due to large differences among studies. Objectives: We aimed to study the association between residential exposure to air pollution and lung function in five European birth cohorts with a standardized exposure assessment following a common protocol. Methods: As part of the European Study of Cohorts for Air Pollution Effects (ESCAPE) we analyzed data from birth cohort studies situated in Germany, Sweden, the Netherlands, and the United Kingdom that measured lung function at 6–8 years of age (n = 5,921). Annual average exposure to air pollution [nitrogen oxides (NO2, NOx), mass concentrations of particulate matter with diameters < 2.5, < 10, and 2.5–10 μm (PM2.5, PM10, and PMcoarse), and PM2.5 absorbance] at the birth address and current address was estimated by land-use regression models. Associations of lung function with estimated air pollution levels and traffic indicators were estimated for each cohort using linear regression analysis, and then combined by random effects meta-analysis. Results: Estimated levels of NO2, NOx, PM2.5 absorbance, and PM2.5 at the current address, but not at the birth address, were associated with small decreases in lung function. For example, changes in forced expiratory volume in 1 sec (FEV1) ranged from –0.86% (95% CI: –1.48, –0.24%) for a 20-μg/m3 increase in NOx to –1.77% (95% CI: –3.34, –0.18%) for a 5-μg/m3 increase in PM2.5. Conclusions: Exposure to air pollution may result in reduced lung function in schoolchildren. Citation: Gehring U, Gruzieva O, Agius RM, Beelen R, Custovic A, Cyrys J, Eeftens M, Flexeder C, Fuertes E, Heinrich J, Hoffmann B, de Jongste JC, Kerkhof M, Klümper C, Korek M, Mölter A, Schultz ES, Simpson A, Sugiri D, Svartengren M, von Berg A, Wijga AH, Pershagen G, Brunekreef B. 2013. Air pollution exposure and lung function in children: the ESCAPE project. Environ Health Perspect 121:1357–1364; http://dx.doi.org/10.1289/ehp.1306770

Thomas F. Bateson, Joel Schwartz (2007)
It is important to focus on children with respect to air pollution because (1) their lungs are not completely developed, (2) they can have greater exposures than adults, and (3) those exposures can deliver higher doses of different composition that may remain in the lung for greater duration. The undeveloped lung is more vulnerable to assault and less able to fully repair itself when injury disrupts morphogenesis. Children spend more time outside, where concentrations of combustion-generated air pollution are generally higher. Children have higher baseline ventilation rates and are more physically active than adults, thus exposing their lungs to more air pollution. Nasal breathing in adults reduces some pollution concentrations, but children are more typically mouth-breathers--suggesting that the composition of the exposure mixture at the alveolar level may be different. Finally, higher ventilation rates and mouth-breathing may pull air pollutants deeper into children's lungs, thereby making clearance slower and more difficult. Children also have immature immune systems, which plays a significant role in asthma. The observed consequences of early life exposure to adverse levels of air pollutants include diminished lung function and increased susceptibility to acute respiratory illness and asthma. Exposure to diesel exhaust, in particular, is an area of concern for multiple endpoints, and deserves further research.