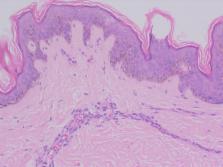 ScienceOpenPublisherPMC
Bookmark
There is no author summary for this article yet. Authors can add summaries to their articles on ScienceOpen to make them more accessible to a non-specialist audience.
Introduction Characterized by hyperpigmented and hypopigmented macules forming a reticulate pattern, dyschromatosis universalis hereditaria (DUH) was first described by Toyamo in Japan. Subsequent cases have been reported from other areas including Europe, China, Saudi Arabia, Tunisia, India, and Nigeria. 1 A variable autosomal inheritance has been described, and a few sporadic cases have been reported. Spontaneous regression has not been recorded. Only one case involving treatment modality was reported in 2011. 2 Case report A 20-year-old woman presented with progressive and asymptomatic mottled hyperpigmentation involving almost the entire body since the age of 5 years. On examination, she was of normal stature and average build. She was noted to have diffuse and symmetric mottled hyperpigmented and hypopigmented macular dyspigmentation involving the face, neck, trunk, back, buttocks, arms, and legs sparing palms, soles, nails, and oral mucosa. Areas of small hypopigmented macules alternated with zones of pigmented macules of variable sizes and shapes. The lesions were predominantly on the forearms, abdomen, and back. There was no atrophy, erythema, or telangiectasia (Fig 1). Dermatoglyphics pattern was preserved. Hair, teeth, and other mucosae were normal. The family history was unremarkable. Fig 1 Hyperpigmented and hypopigmented macular dyspigmentation on abdomen and forearms formed a reticulate pattern. Systemic examination found no abnormalities. Skin biopsy of hypopigmented lesions on the right abdomen found a normal epidermis and perivascular lymphocytes and melanocytes within the papillary dermis. Skin biopsy of hyperpigmented lesions on the left forearm showed increased melanin granules and pigmentation in the basal cell layer of the epidermis and perivascular lymphocytes and melanocytes within the papillary dermis (Fig 2). The generalized distribution of the hyperpigmented and hypopigmented macules and biopsy results were consistent with the diagnosis of DUH. Fig 2 Increased melanin granules and pigmentation in the basal cell layer of the epidermis (indicated by the arrows).(Hematoxylin-eosin stain; original magnification: ×200.) We treated a 5-cm × 1-cm area on the left forearm with a 755-nm Q-switched alexandrite laser, 3-mm spot size, 5.2-J/cm2 fluence, and 5-Hz frequency. The patient noticed initial darkening of lentigines and then light peeling and fading over 10 to 14 days. No erythema, edema, blister, paleness, bleeding, or ecchymosis were noticed. An ice pack was applied for approximately 30 minutes postoperatively. The patient was instructed to avoid sun exposure and to apply sunblock daily. Significant improvement was noted after 1 treatment without any scarring or undesirable pigmentary changes. Compared with the lentigines before the treatment (Fig 3, A), no recurrence was noted at the 11-month follow-up after 1 treatment session (Fig 3, B). Fig 3 A, Left forearm before treatment. B, Area treated with 755-nm Q-switched alexandrite laser (within the pink line) on the left forearm 11 months after a single laser treatment. Discussion DUH is a rare genodermatosis characterized by hyperpigmented and hypopigmented macules forming a generalized reticulate or mottled pattern. There are cases reported with varying phenotypes involving the oral mucosa, tongue, palms, soles, hair, and nails.3, 4 Systemic abnormalities include renal failure, 5 primary ovarian failure, hypothyroidism, 6 and oral leukokeratosis. 7 Traditional therapeutic modalities for pigmentary lesions included surgical excision, dermabrasion, electrodessication, and chemical peeling. These treatments may have side effects such as scarring or dyspigmentation, which limit their use in generalized pigmentary disorders such as DUH. Intense pulsed light (IPL) is found to be a cost-effective and safe treatment modality for hyperpigmentation. We did not test treat this patient's forearm with IPL, because IPL has been used mainly for cosmetic purposes or facial rejuvenation in our department, and we did not have the experience of treating sites other than the face. Also, it may require multiple treatment sessions to achieve satisfactory results. IPL would be considered if the patient continued with treatments over other anatomic sites, such as the face. We considered that IPL had limited effects for complicated skin problems and combination therapies with IPL and laser or other cosmetic technologies might be needed. The Q-switched alexandrite laser at a 755-nm or 752-nm wavelength and 5- to 7-J/cm2 fluence, used on a bimonthly or trimonthly basis, is reported to be an effective and safe treatment for facial and labial lentigines associated with Peutz-Jeghers syndrome, 8 cutaneous reticulated acropigmentation of Kitamura, 9 and lips, oral mucosa, and finger pigmentary disorders of Laugier-Hunziker syndrome. 10 The only previously reported use of the Q-switched alexandrite laser treatment for the hyperpigmented macules of DUH produced dramatic improvement on the face and lips of a Japanese woman with a 45-year history of DUH. We treated a test area on the forearm using the Q-switched alexandrite laser, and the treatment proved to be effective, well tolerated, and long lasting. We recommend that this modality be considered in the treatment of other sites. Further study is needed to determine the optimal number of treatment sessions and the interval between treatments.

G Sethuraman, L Smiles, D Thappa … (2002)
Dyschromatosis universalis hereditaria is a clinically heterogenous disorder. We report two unrelated Indian patients with dyschromatosis universalis hereditaria, who had generalized and progressive reticulate hyper- and hypo-pigmentation of the skin. The oral mucosa and tongue also showed mottled pigmentation. Intriguingly, the palms and soles were also affected with a diffuse hyper-pigmentation interspersed with spotty de-pigmented macules. Dystrophic nail changes with pterygium formation were seen in one case. Histopathology revealed a variable degree of pigmentary incontinence. Although the precise aetiology of this disorder is not yet known, the clinicopathological findings implicate an inherent abnormality of melanosomes or melanin processing.

Treatment of Laugier-Hunziker syndrome with the Q-switched alexandrite laser in 22 Chinese patients.

Ning Sun, Joyce Ma, Hua Liu … (2010)
Laugier-Hunziker syndrome (LHS), a rare, acquired pigmentary disorder of the lips, oral mucosa, and fingers, is known to be an entirely benign disease with no systemic manifestations. In the past, the pigmentation has been treated efficiently in a few patients with the Q-switched neodymium: yttrium-aluminum-garnet (Nd:YAG) laser and the Q-switched alexandrite laser (QSAL). In order to evaluate the efficacy and safety of QSAL on Chinese patients of LHS, we treated 22 patients with QSAL in the past 5 years. Treatments were delivered on a bimonthly or trimonthly basis until the abnormal pigmentation totally disappeared. Patients were evaluated at each visit for evidence of dyspigmentation, scarring, or other untoward effects from the laser treatment. Our 22 subjects consisted of 18 females and 4 males with a mean age of 42.4 years. After only one session of laser treatment, the clearing on the lips was as follow: 18 (81.8%) excellent, 2 (9.1%) good, 1 (4.5%) fair and 1 (4.5%) poor. Eighteen patients (81.8%) with LHS, who had achieved excellent clearing after only one session of laser treatment, did not receive further treatment. Among the left four patients, three patients (13.6%) achieved complete results after three laser treatments. Only one patient required six sessions to achieve complete clearance. No scarring was noted after any of the treatments. The appearance of pigmentation on mucous membranes in a middle-aged patient without a significant family history for skin disorders should prompt consideration for the possible diagnosis of LHS. Our study has also demonstrated QSAL to be highly effective and safe in the treatment of LHS.

Salinee Rojhirunsakool, Vasanop Vachiramon (2015)
Dyschromatosis universalis hereditaria (DUH) is a rare autosomal dominant inherited dermatosis which usually appears during childhood and is characterized by dyspigmentation, with both hypopigmented and hyperpigmented macules. We report a case of DUH with unexplained childhood-onset renal failure. The association between DUH and renal failure is yet to be proven by further studies.