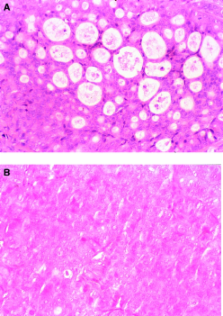 The distribution of secondary growths in cancer of the breast. 1889.

Andrzej A. Przybyla,  J Chirgwin,  J Rutter … (1979)
Intact ribonucleic acid (RNA) has been prepared from tissues rich in ribonuclease such as the rat pancreas by efficient homogenization in a 4 M solution of the potent protein denaturant guanidinium thiocyanate plus 0.1 M 2-mercaptoethanol to break protein disulfide bonds. The RNA was isolated free of protein by ethanol precipitation or by sedimentation through cesium chloride. Rat pancreas RNA obtained by these means has been used as a source for the purification of alpha-amylase messenger ribonucleic acid.

Bradley A. Spicer,  S Gendler (1994)
The last seven years have been exciting in the world of mucin biology. Molecular analyses of mucin genes and deduced protein structures have provided insight into structural features of mucins and tools with which to examine expression, secretion, and glycosylation, thereby enabling a better understanding of the role of mucins in normal physiological processes and in disease. Functional studies are in progress both in vitro using cDNAs and cell lines and in vivo utilizing mutant mice in which a particular mucin gene has been inactivated or overexpressed. These studies should help determine whether the functions of mucins are restricted to protection and lubrication, or if they are involved in the adhesion of tumor cells to other cells or tissue components or in modulation of the immune system.