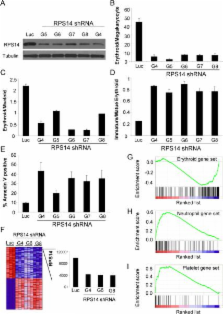 Somatic chromosomal deletions in cancer are thought to indicate the location of tumor suppressor genes, whereby complete loss of gene function occurs through biallelic deletion, point mutation, or epigenetic silencing, thus fulfilling Knudson's two-hit hypothesis. 1 In many recurrent deletions, however, such biallelic inactivation has not been found. One prominent example is the 5q- syndrome, a subtype of myelodysplastic syndrome (MDS) characterized by a defect in erythroid differentiation. 2 Here, we describe an RNA interference (RNAi)-based approach to discovery of the 5q- disease gene. We find that partial loss of function of the ribosomal protein RPS14 phenocopies the disease in normal hematopoietic progenitor cells, and moreover that forced expression of RPS14 rescues the disease phenotype in patient-derived bone marrow cells. In addition, we identified a block in the processing of pre-rRNA in RPS14 deficient cells that is highly analogous to the functional defect in Diamond Blackfan Anemia, linking the molecular pathophysiology of the 5q- syndrome to a congenital bone marrow failure syndrome. These results indicate that the 5q- syndrome is caused by a defect in ribosomal protein function, and suggests that RNAi screening is an effective strategy for identifying causal haploinsufficiency disease genes.

R A Knudson (1971)
Based upon observations on 48 cases of retinoblastoma and published reports, the hypothesis is developed that retinoblastoma is a cancer caused by two mutational events. In the dominantly inherited form, one mutation is inherited via the germinal cells and the second occurs in somatic cells. In the nonhereditary form, both mutations occur in somatic cells. The second mutation produces an average of three retinoblastomas per individual inheriting the first mutation. Using Poisson statistics, one can calculate that this number (three) can explain the occasional gene carrier who gets no tumor, those who develop only unilateral tumors, and those who develop bilateral tumors, as well as explaining instances of multiple tumors in one eye. This value for the mean number of tumors occurring in genetic carriers may be used to estimate the mutation rate for each mutation. The germinal and somatic rates for the first, and the somatic rate for the second, mutation, are approximately equal. The germinal mutation may arise in some instances from a delayed mutation.

Identification and validation of oncogenes in liver cancer using an integrative oncogenomic approach.

John Silke,  D Mu,  Scott Powers … (2006)
The heterogeneity and instability of human tumors hamper straightforward identification of cancer-causing mutations through genomic approaches alone. Herein we describe a mouse model of liver cancer initiated from progenitor cells harboring defined cancer-predisposing lesions. Genome-wide analyses of tumors in this mouse model and in human hepatocellular carcinomas revealed a recurrent amplification at mouse chromosome 9qA1, the syntenic region of human chromosome 11q22. Gene-expression analyses delineated cIAP1, a known inhibitor of apoptosis, and Yap, a transcription factor, as candidate oncogenes in the amplicon. In the genetic context of their amplification, both cIAP1 and Yap accelerated tumorigenesis and were required to sustain rapid growth of amplicon-containing tumors. Furthermore, cIAP1 and Yap cooperated to promote tumorigenesis. Our results establish a tractable model of liver cancer, identify two oncogenes that cooperate by virtue of their coamplification in the same genomic locus, and suggest an efficient strategy for the annotation of human cancer genes.

G Tchernia,  H Matsson,  T N Willig … (1999)
Diamond-Blackfan anaemia (DBA) is a constitutional erythroblastopenia characterized by absent or decreased erythroid precursors. The disease, previously mapped to human chromosome 19q13, is frequently associated with a variety of malformations. To identify the gene involved in DBA, we cloned the chromosome 19q13 breakpoint in a patient with a reciprocal X;19 chromosome translocation. The breakpoint occurred in the gene encoding ribosomal protein S19. Furthermore, we identified mutations in RPS19 in 10 of 40 unrelated DBA patients, including nonsense, frameshift, splice site and missense mutations, as well as two intragenic deletions. These mutations are associated with clinical features that suggest a function for RPS19 in erythropoiesis and embryogenesis.

Correspondence and requests for materials should be addressed to T.R.G. ( golub@ 123456broad.mit.edu ).