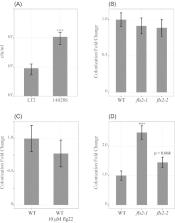 Salmonellosis outbreaks associated with sprouted legumes have been a food safety concern for over two decades. Despite evidence that Salmonella enterica triggers biotic plant defense pathways, it has remained unclear how plant defenses impact Salmonella growth on sprouted legumes. We used Medicago truncatula mutants in which the gene for the flagellin receptor FLS2 was disrupted to demonstrate that plant defenses triggered by FLS2 elicitation do not impact the growth of Salmonella enterica serovar Typhimurium ATCC 14028S. As a control, we tested the growth of Salmonella enterica serovar Typhimurium LT2, which has a defect in rpoS that increases its sensitivity to reactive oxygen species. LT2 displayed enhanced growth on M. truncatula FLS2 mutants in comparison to wild-type M. truncatula. We hypothesize that these growth differences are primarily due to differences in 14028S and LT2 reactive oxygen species sensitivity. Results from this study show that FLS2-mediated plant defenses are ineffective in inhibiting growth of Salmonella entrica 14028S.

Cyril Zipfel,  Georg Felix,  Silke Robatzek … (2004)
Plants and animals recognize microbial invaders by detecting pathogen-associated molecular patterns (PAMPs) such as flagellin. However, the importance of flagellin perception for disease resistance has, until now, not been demonstrated. Here we show that treatment of plants with flg22, a peptide representing the elicitor-active epitope of flagellin, induces the expression of numerous defence-related genes and triggers resistance to pathogenic bacteria in wild-type plants, but not in plants carrying mutations in the flagellin receptor gene FLS2. This induced resistance seems to be independent of salicylic acid, jasmonic acid and ethylene signalling. Wild-type and fls2 mutants both display enhanced resistance when treated with crude bacterial extracts, even devoid of elicitor-active flagellin, indicating the existence of functional perception systems for PAMPs other than flagellin. Although fls2 mutant plants are as susceptible as the wild type when bacteria are infiltrated into leaves, they are more susceptible to the pathogen Pseudomonas syringae pv. tomato DC3000 when it is sprayed on the leaf surface. Thus, flagellin perception restricts bacterial invasion, probably at an early step, and contributes to the plant's disease resistance.

X. Zhao,  Kirankumar Mysore,  Y. Kwak … (2008)
Medicago truncatula is a fast-emerging model for the study of legume functional biology. We used the tobacco retrotransposon Tnt1 to tag the Medicago genome and generated over 7600 independent lines representing an estimated 190,000 insertion events. Tnt1 inserted on average at 25 different locations per genome during tissue culture, and insertions were stable during subsequent generations in soil. Analysis of 2461 Tnt1 flanking sequence tags (FSTs) revealed that Tnt1 appears to prefer gene-rich regions. The proportion of Tnt1 insertion in coding sequences was 34.1%, compared to the expected 15.9% if random insertions were to occur. However, Tnt1 showed neither unique target site specificity nor strong insertion hot spots, although some genes were more frequently tagged than others. Forward-genetic screening of 3237 R(1) lines resulted in identification of visible mutant phenotypes in approximately 30% of the regenerated lines. Tagging efficiency appears to be high, as all of the 20 mutants examined so far were found to be tagged. Taking the properties of Tnt1 into account and assuming 1.7 kb for the average M. truncatula gene size, we estimate that approximately 14,000-16,000 lines would be sufficient for 90% gene tagging coverage in M. truncatula. This is in contrast to more than 500,000 lines required to achieve the same saturation level using T-DNA tagging. Our data demonstrate that Tnt1 is an efficient insertional mutagen in M. truncatula, and could be a primary choice for other plant species with large genomes.

David J. Stone,  Miguel A. Iñiguez,  Brian M. M. Ahmer … (2005)
Bacterial endophytes reside within the interior of plants without causing disease or forming symbiotic structures. Some endophytes, such as Klebsiella pneumoniae 342 (Kp342), enhance plant growth and nutrition. Others, such as Salmonella enterica serovar Typhimurium (S. typhimurium), are human pathogens that contaminate raw produce. Several lines of evidence are presented here to support the hypothesis that plant defense response pathways regulate colonization by endophytic bacteria. An ethylene-insensitive mutant of Medicago truncatula is hypercolonized by Kp342 compared to the parent genotype. Addition of ethylene, a signal molecule for induced systemic resistance in plants, decreased endophytic colonization in Medicago spp. This ethylene-mediated inhibition of endophytic colonization was reversed by addition of the ethylene action inhibitor, 1-methylcyclopropene. Colonization of Medicago spp. by S. typhimurium also was affected by exogenous ethylene. Mutants lacking flagella or a component of the type III secretion system of Salmonella pathogenicity island 1 (TTSS-SPI1) colonize the interior of Medicago spp. in higher numbers than the wild type. Arabidopsis defense response-related genotypes indicated that only salicylic acid (SA)-independent defense responses contribute to restricting colonization by Kp342. In contrast, colonization by S. typhimurium is affected by both SA-dependent and -independent responses. S. typhimurium mutants further delineated these responses, suggesting that both flagella and TTSS-SPI1 effectors can be recognized. Flagella act primarily through SA-independent responses (compromising SA accumulation still affected colonization in the absence of flagella). Removal of a TTSS-SPI1 effector resulted in hypercolonization regardless of whether the genotype was affected in either SA-dependent or SA-independent responses. Consistent with these results, S. typhimurium activates the promoter of PR1, a SA-dependent pathogenesis-related gene, while S. typhimurium mutants lacking the TTSS-SPI1 failed to activate this promoter. These observations suggest approaches to reduce contamination of raw produce by human enteric pathogens and to increase the number of growth-promoting bacteria in plants.