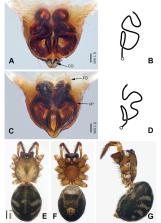 Jeremy Miller,  Anthea Carmichael,  Martín Ramírez … (2010)
Penestomine spiders were first described from females only and placed in the family Eresidae. Discovery of the male decades later brought surprises, especially in the morphology of the male pedipalp, which features (among other things) a retrolateral tibial apophysis (RTA). The presence of an RTA is synapomorphic for a large clade of spiders exclusive of Eresidae. A molecular data matrix based on four loci was constructed to test two alternative hypotheses: (1) penestomines are eresids and the RTA is convergent, or (2) penestomines belong within the RTA clade. Taxon sampling concentrated on the Eresidae and the RTA clade, especially outside of the Dionycha and Lycosoidea. Evolution of the cribellum, conventionally characterized as a primitive araneomorph spinning organ lost multiple times, is explored. Parsimony optimization indicates repeated appearances of the cribellum. Exploration of asymmetric rates of loss and gain in both a likelihood framework and using a Sankoff matrix under parsimony reveals that cribellum homology is supported when losses are two times more likely than gains. We suggest that when complicated characters appear (under parsimony optimization) to evolve multiple times, investigators should consider alternative reconstructions featuring a relatively high rate of loss. Evolution of other morphological characters is also investigated. The results imply revised circumscription of some RTA-clade families, including Agelenidae, Amaurobiidae, Cybaeidae, Dictynidae and Hahniidae. Some nomenclatural changes are formally proposed here; others await further investigation. The family Penestomidae (NEW RANK) is established. Tamgrinia, not Neoramia, is the cribellate sister clade of the ecribellate Agelenidae. Tamgrinia and the subfamily Coelotinae are transferred from the family Amaurobiidae to the family Agelenidae. Zanomys and its relatives are not coelotines but belong to a clade tentatively identified as Macrobuninae. 2010 Elsevier Inc. All rights reserved.

Spider taxonomy for an advanced China.