“ We are like co-wives”: Traditional healers' views on collaborating with the formal Child and Adolescent Mental Health System in Uganda 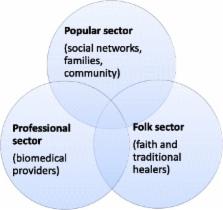 In-depth interviews with 20 purposively selected traditional healers were conducted in November 2015. A semi-structured interview guide was used to explore: 1) The experiences of traditional healers with mental ill-health in children and adolescents; 2) their willingness to collaborate with the formal health system; and 3) their perception of clinicians’ willingness to collaborate with them. Interviews were conducted in local languages and tape recorded. Data were analysed using thematic analysis.

Traditional healers described several experiences managing children and adolescents with mental illness, which they ascribed to spiritual and physical causes. The spiritual explanations were a consequence of unhappy ancestral spirits, modern religions and witchcraft, while physical causes mentioned included substance abuse and fevers. No traditional healer had received a patient referred to them from a medical clinic although all had referred patients to clinics for non-mental health reasons.

How Many Interviews Are Enough?: An Experiment with Data Saturation and Variability

Patrick McGorry,  Vikram Patel,  Sarah E. Hetrick … (2007)
Mental disorders account for a large proportion of the disease burden in young people in all societies. Most mental disorders begin during youth (12-24 years of age), although they are often first detected later in life. Poor mental health is strongly related to other health and development concerns in young people, notably lower educational achievements, substance abuse, violence, and poor reproductive and sexual health. The effectiveness of some interventions for some mental disorders in this age-group have been established, although more research is urgently needed to improve the range of affordable and feasible interventions, since most mental-health needs in young people are unmet, even in high-income countries. Key challenges to addressing mental-health needs include the shortage of mental-health professionals, the fairly low capacity and motivation of non-specialist health workers to provide quality mental-health services to young people, and the stigma associated with mental disorder. We propose a population-based, youth focused model, explicitly integrating mental health with other youth health and welfare expertise. Addressing young people's mental-health needs is crucial if they are to fulfil their potential and contribute fully to the development of their communities.

Scale up services for mental disorders: a call for action.

Kushang V. Patel,  C. Lund,  G. Thornicroft … (2007)
We call for the global health community, governments, donors, multilateral agencies, and other mental health stakeholders, such as professional bodies and consumer groups, to scale up the coverage of services for mental disorders in all countries, but especially in low-income and middle-income countries. We argue that a basic, evidence-based package of services for core mental disorders should be scaled up, and that protection of the human rights of people with mental disorders and their families should be strengthened. Three questions are critical to the scaling-up process. What resources are needed? How can progress towards these goals be monitored? What should be the priorities for mental health research? To address these questions, we first estimated that the amount needed to provide services on the necessary scale would be US$2 per person per year in low-income countries and $3-4 in lower middle-income countries, which is modest compared with the requirements for scaling-up of services for other major contributors to the global burden of disease. Second, we identified a series of core and secondary indicators to track the progress that countries make toward achievement of mental health goals; many of these indicators are already routinely monitored in many countries. Third, we did a priority-setting exercise to identify gaps in the evidence base in global mental health for four categories of mental disorders. We show that funding should be given to research that develops and assesses interventions that can be delivered by people who are not mental health professionals, and that assesses how health systems can scale up such interventions across all routine-care settings. We discuss strategies to overcome the five main barriers to scaling-up of services for mental disorders; one major strategy will be sustained advocacy by diverse stakeholders, especially to target multilateral agencies, donors, and governments. This Series has provided the evidence for advocacy. Now we need political will and solidarity, above all from the global health community, to translate this evidence into action. The time to act is now.