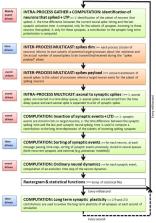 Cortical synapse organization supports a range of dynamic states on multiple spatial and temporal scales, from synchronous slow wave activity (SWA), characteristic of deep sleep or anesthesia, to fluctuating, asynchronous activity during wakefulness (AW). Such dynamic diversity poses a challenge for producing efficient large-scale simulations that embody realistic metaphors of short- and long-range synaptic connectivity. In fact, during SWA and AW different spatial extents of the cortical tissue are active in a given timespan and at different firing rates, which implies a wide variety of loads of local computation and communication. A balanced evaluation of simulation performance and robustness should therefore include tests of a variety of cortical dynamic states. Here, we demonstrate performance scaling of our proprietary Distributed and Plastic Spiking Neural Networks (DPSNN) simulation engine in both SWA and AW for bidimensional grids of neural populations, which reflects the modular organization of the cortex. We explored networks up to 192 × 192 modules, each composed of 1,250 integrate-and-fire neurons with spike-frequency adaptation, and exponentially decaying inter-modular synaptic connectivity with varying spatial decay constant. For the largest networks the total number of synapses was over 70 billion. The execution platform included up to 64 dual-socket nodes, each socket mounting 8 Intel Xeon Haswell processor cores @ 2.40 GHz clock rate. Network initialization time, memory usage, and execution time showed good scaling performances from 1 to 1,024 processes, implemented using the standard Message Passing Interface (MPI) protocol. We achieved simulation speeds of between 2.3 × 10 9 and 4.1 × 10 9 synaptic events per second for both cortical states in the explored range of inter-modular interconnections.

Artur Luczak,  Péter Barthó,  Kenneth D M Harris (2009)
Neocortical assemblies produce complex activity patterns both in response to sensory stimuli and spontaneously without sensory input. To investigate the structure of these patterns, we recorded from populations of 40-100 neurons in auditory and somatosensory cortices of anesthetized and awake rats using silicon microelectrodes. Population spike time patterns were broadly conserved across multiple sensory stimuli and spontaneous events. Although individual neurons showed timing variations between stimuli, these were not sufficient to disturb a generally conserved sequential organization observed at the population level, lasting for approximately 100 ms with spiking reliability decaying progressively after event onset. Preserved constraints were also seen in population firing rate vectors, with vectors evoked by individual stimuli occupying subspaces of a larger but still constrained space outlined by the set of spontaneous events. These results suggest that population spike patterns are drawn from a limited "vocabulary," sampled widely by spontaneous events but more narrowly by sensory responses.

Nicolas Brunel,  Vincent Hakim (1999)
We study analytically the dynamics of a network of sparsely connected inhibitory integrate-and-fire neurons in a regime where individual neurons emit spikes irregularly and at a low rate. In the limit when the number of neurons --> infinity, the network exhibits a sharp transition between a stationary and an oscillatory global activity regime where neurons are weakly synchronized. The activity becomes oscillatory when the inhibitory feedback is strong enough. The period of the global oscillation is found to be mainly controlled by synaptic times but depends also on the characteristics of the external input. In large but finite networks, the analysis shows that global oscillations of finite coherence time generically exist both above and below the critical inhibition threshold. Their characteristics are determined as functions of systems parameters in these two different regions. The results are found to be in good agreement with numerical simulations.