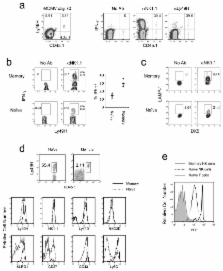 In an adaptive immune response, naïve T cells proliferate during infection and generate long-lived memory cells that undergo secondary expansion following re-encounter with the same pathogen. Although Natural Killer cells traditionally have been classified as cells of the innate immune system, they share many similarities with cytotoxic T lymphocytes. In a mouse model of cytomegalovirus (MCMV) infection, we demonstrate that, like T cells, NK cells bearing the virus-specific Ly49H receptor proliferate 100-fold in the spleen and 1000-fold in the liver following infection. Following a contraction phase, Ly49H + NK cells reside in lymphoid and non-lymphoid organs for several months. These self-renewing “memory” NK cells rapidly degranulate and produce cytokines upon reactivation. Adoptive transfer of these NK cells into naïve animals followed by viral challenge results in a robust secondary expansion and protective immunity. These findings reveal novel properties of NK cells previously attributed only to cells of the adaptive immune system.

Leo Lefrancois,  L Lefrançois,  A Marzo … (2001)
Many intracellular pathogens infect a broad range of host tissues, but the importance of T cells for immunity in these sites is unclear because most of our understanding of antimicrobial T cell responses comes from analyses of lymphoid tissue. Here, we show that in response to viral or bacterial infection, antigen-specific CD8 T cells migrated to nonlymphoid tissues and were present as long-lived memory cells. Strikingly, CD8 memory T cells isolated from nonlymphoid tissues exhibited effector levels of lytic activity directly ex vivo, in contrast to their splenic counterparts. These results point to the existence of a population of extralymphoid effector memory T cells poised for immediate response to infection.

Kaja Murali-Krishna,  John Altman,  M. Suresh … (1998)
Viral infections induce extensive T cell proliferation in vivo, but the specificity of the majority of the responding T cells has not been defined. To address this issue we used tetramers of MHC class I molecules containing viral peptides to directly visualize antigen-specific CD8 T cells during acute LCMV infection of mice. Based on tetramer binding and two sensitive assays measuring interferon-gamma production at the single-cell level, we found that 50%-70% of the activated CD8 T cells were LCMV specific [2 x 10(7) virus-specific cells/spleen]. Following viral clearance, antigen-specific CD8 T cell numbers dropped to 10(6) per spleen and were maintained at this level for the life of the mouse. Upon rechallenge with LCMV, there was rapid expansion of memory T cells, but after infection with the heterologous vaccinia virus there was no detectable change in the numbers of LCMV-specific memory CTL. Therefore, much of the CD8 T cell expansion seen during viral infection represents antigen-specific cells and warrants a revision of our current thinking on the size of the antiviral response.

Department of Microbiology and Immunology and the Cancer Research Institute, University of California, San Francisco, CA 94143

Reprints and permissions information is available at www.nature.com/reprints. The authors have no conflicting financial interests. Correspondence and requests for materials should be addressed to L.L.L. ( lewis.lanier@ 123456ucsf.edu )