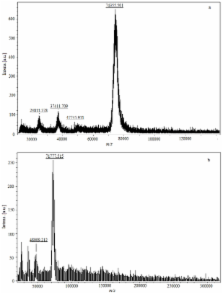 In order to generate an antibody against a small hapten molecule, the hapten is cross-linked with carrier protein to make it immunogenic. In this study, the hapten (Fumonisin B 1, FB 1) was coupled to ovalbumin (OVA) and bovine serum albumin (BSA), respectively by a short cross-linker reagent (glutaraldehyde, GA). To develop a technique for detecting the conjugation, the hapten-protein conjugates (FB 1-OVA and FB 1-BSA) were characterized thoroughly by ultraviolet (UV) spectroscopy, Fourier transform infrared (FT-IR) spectroscopy, gel electrophoresis and matrix-assisted laser desorption ionization time-of-flight mass spectrometry (MALDI-TOF-MS), respectively. The molecular weights of FB 1-BSA and FB 1-OVA were 74,355.301 Da and 48,009.212 Da, respectively determined by the method of MALDI-TOF-MS. The molecular coupling ratios were 11 and 5 in FB 1-BSA and FB 1-OVA, respectively. In this experiment, MALDI-TOF-MS was selected as the most efficient method to evaluate the cross-linking effect and calculate the molecular coupling ratio.

Jilie Kong,  S. S. Yu (2007)
Infrared spectroscopy is one of the oldest and well established experimental techniques for the analysis of secondary structure of polypeptides and proteins. It is convenient, non-destructive, requires less sample preparation, and can be used under a wide variety of conditions. This review introduces the recent developments in Fourier transform infrared (FTIR) spectroscopy technique and its applications to protein structural studies. The experimental skills, data analysis, and correlations between the FTIR spectroscopic bands and protein secondary structure components are discussed. The applications of FTIR to the secondary structure analysis, conformational changes, structural dynamics and stability studies of proteins are also discussed.

Natural functions of mycotoxins and control of their biosynthesis in fungi.

Corrado Fanelli,  Anna A. Fabbri,  Alessandra Ricelli … (2010)
Mycotoxins are harmful secondary metabolites produced by a range of widespread fungi belonging in the main to Fusarium, Aspergillus and Penicillium genera. But why should fungi produce toxins? And how is the biosynthesis of these toxins regulated? Several separate factors are now known to be capable of modulating mycotoxin synthesis; however, in this study, focussing just on mycotoxins whose regulatory mechanisms have already been established, we introduce a further factor based on a novel consideration. Various different mycotoxin biosynthetic pathways appear to share a common factor in that they are all susceptible to the influence of reactive oxygen species. In fact, when a fungus receives an external stimulus, it reacts by activating, through a well-defined signal cascade, a profound change in its lifestyle. This change usually leads to the activation of global gene regulators and, in particular, of transcription factors which modulate mycotoxin gene cluster expression. Some mycotoxins have a clear-cut role both in generating a pathogenetic process, i.e. fumonisins and some trichothecenes, and in competing with other organisms, i.e. patulin. In other cases, such as aflatoxins, more than one role can be hypothesised. In this review, we suggest an "oxidative stress theory of mycotoxin biosynthesis" to explain the role and the regulation of some of the above mentioned toxins.

Grzegorz Koczyk,  Łukasz Stępień,  Agnieszka Waśkiewicz (2011)
Fumonisins are polyketide-derived mycotoxins, produced by several Fusarium species, and its biosynthetic pathway is controlled by the FUM cluster--a group of genes exhibiting a common expression pattern during fumonisin biosynthesis. The most common are the B analogues with fumonisin B(1) (FB(1)) being the most prevalent. At least a part of the inter- and intraspecific variation in FBs synthesis level can be explained by the sequence differences inside FUM cluster. The aim of our study was to evaluate the toxin production and sequence variability in FUM genes and intergenic regions among thirty isolates of seven species reported as potential fumonisins producers: Fusarium anthophilum, Fusarium fujikuroi, Fusarium nygamai, Fusarium oxysporum, Fusarium proliferatum, Fusarium subglutinans and Fusarium verticillioides, particularly with respect to FBs synthesis. Fumonisins were produced in high amounts (over 1mg g(-1)) by one isolate of F. subglutinans, three of F. verticillioides and all F. proliferatum isolates except one, regardless of the host organism. The remaining isolates produced low amounts of FBs and two F. verticillioides isolates didn't produce it at all. The lowest variation in amount of toxin produced was found among F. proliferatum isolates. Based on the translation elongation factor 1α (tef-1α) sequence of F. fujikuroi, a species-specific marker was developed. The intergenic region presents similar opportunity for F. nygamai identification. The phylogenetic reconstruction based on FUM1 gene generally reflects the scenario presented by tef-1α sequences. Although the sequence similarities for intergenic regions were lower than in coding regions, there are clearly conserved patterns enabling separation of different subsets of species, including the non-producer species. Copyright © 2010 The British Mycological Society. Published by Elsevier Ltd. All rights reserved.