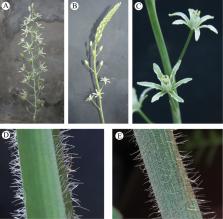 A new species, Loncomelos koprulense ( Asparagaceae ), is described and illustrated from southern Turkey. It is a very rare endemic species growing on small semi-rocky escarpments within the Köprülü Kanyon in the province of Antalya. Morphologically for its hairy leaves, L. koprulense shows some relationships with L. malatyanum and L. tardum , species localized in Anatolia too. The chromosome number of the new species is 2 n = 2 x = 22. Geographical distribution map for L. koprulense , L. malatyanum and L. tardum is provided.

NOMENCLATURE FOR CENTROMERIC POSITION ON CHROMOSOMES

Phylogenetics of Hyacinthaceae Based on Plastid DNA Sequences

Molecular phylogenetics of subfamily Ornithogaloideae (Hyacinthaceae) based on nuclear and plastid DNA regions, including a new taxonomic arrangement.

Angel Juan,  B Crespo-Facorro,  Jose Azorín … (2010)
The taxonomic arrangement within subfamily Ornithogaloideae (Hyacinthaceae) has been a matter of controversy in recent decades: several new taxonomic treatments have been proposed, based exclusively on plastid DNA sequences, and these have resulted in classifications which are to a great extent contradictory. Some authors have recognized only a single genus Ornithogalum for the whole subfamily, including 250-300 species of variable morphology, whereas others have recognized many genera. In the latter case, the genera are inevitably much smaller and they are better defined morphologically. However, some are not monophyletic as circumscribed. Phylogenetic analyses of Ornithogaloideae were based on nucleotide sequences of four plastid regions (trnL intron, trnL-F spacer, rbcL and matK) and a nuclear region (ITS). Eighty species covering all relevant taxonomic groups previously recognized in the subfamily were sampled. Parsimony and Bayesian analyses were performed. The molecular data were compared with a matrix of 34 morphological characters. Combinations of plastid and nuclear data yielded phylogenetic trees which are better resolved than those obtained with any plastid region alone or plastid regions in combination. Three main clades are found, corresponding to the previously recognized tribes Albuceae, Dipcadieae and Ornithogaleae. In these, up to 19 clades are described which are definable by morphology and biogeography. These mostly correspond to previously described taxa, though some need recircumscription. Morphological characters are assessed for their diagnostic value for taxonomy in the subfamily. On the basis of the phylogenetic analyses, 19 monophyletic genera are accepted within Ornithogaloideae: Albuca, Avonsera, Battandiera, Cathissa, Coilonox, Dipcadi, Eliokarmos, Elsiea, Ethesia, Galtonia, Honorius, Loncomelos, Melomphis, Neopatersonia, Nicipe, Ornithogalum, Pseudogaltonia, Stellarioides and Trimelopter. Each of these has a particular syndrome of morphological characters. As a result, 105 new combinations are made and two new names are proposed to accommodate the taxa studied in the new arrangement. A short morphological diagnosis, synonymy, details of distribution and an identification key are presented.