The genetic background of acromegaly 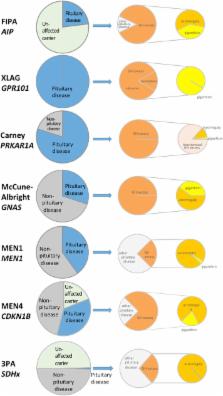 Acromegaly is caused by a somatotropinoma in the vast majority of the cases. These are monoclonal tumors that can occur sporadically or rarely in a familial setting. In the last few years, novel familial syndromes have been described and recent studies explored the landscape of somatic mutations in sporadic somatotropinomas. This short review concentrates on the current knowledge of the genetic basis of both familial and sporadic acromegaly.

Activating mutations of the stimulatory G protein in the McCune-Albright syndrome.

Jerry Spiegel,  A Shenker,  Roberto Weinstein … (1991)
The McCune-Albright syndrome is a sporadic disease characterized by polyostotic fibrous dysplasia, café au lait spots, sexual precocity, and hyperfunction of multiple endocrine glands. These manifestations may be explained by a somatic mutation in affected tissues that results in activation of the signal-transduction pathway generating cyclic AMP (cAMP). We analyzed DNA from tissues of patients with the McCune-Albright syndrome for the presence of activating mutations of the gene for the alpha subunit of the G protein (Gs alpha) that stimulates cAMP formation. Genomic DNA fragments encompassing regions (exons 8 and 9) previously found to contain activating missense mutations of the Gs alpha gene (gsp mutations) in sporadically occurring pituitary tumors were amplified in tissues from four patients with the McCune-Albright syndrome by the polymerase chain reaction. The amplified DNA was analyzed for mutations by denaturing gradient gel electrophoresis and allele-specific oligonucleotide hybridization. We detected one of two activating mutations within exon 8 of the Gs alpha gene in tissues from all four patients, including affected endocrine organs (gonads, adrenal glands, thyroid, and pituitary) and tissues not classically involved in the McCune-Albright syndrome. In two of the patients, histidine was substituted for arginine at position 201 of Gs alpha, and in the other two patients cysteine was substituted for the same arginine residue. In each patient the proportion of cells affected varied from tissue to tissue. In two endocrine organs, the highest proportion of mutant alleles was found in regions of abnormal cell proliferation. Mutations within exon 8 of the Gs alpha gene that result in increased activity of the Gs protein and increased cAMP formation are present in various tissues of patients with the McCune-Albright syndrome. Somatic mutation of this gene early in embryogenesis could result in the mosaic population of normal and mutant-bearing tissues that may underlie the clinical manifestations of this disease.

,  Paul Newey,  Angus W. G. Walls … (2012)
The aim was to provide guidelines for evaluation, treatment, and genetic testing for multiple endocrine neoplasia type 1 (MEN1). The group, which comprised 10 experts, including physicians, surgeons, and geneticists from international centers, received no corporate funding or remuneration. Guidelines were developed by reviews of peer-reviewed publications; a draft was prepared, reviewed, and rigorously revised at several stages; and agreed-upon revisions were incorporated. MEN1 is an autosomal dominant disorder that is due to mutations in the tumor suppressor gene MEN1, which encodes a 610-amino acid protein, menin. Thus, the finding of MEN1 in a patient has important implications for family members because first-degree relatives have a 50% risk of developing the disease and can often be identified by MEN1 mutational analysis. MEN1 is characterized by the occurrence of parathyroid, pancreatic islet, and anterior pituitary tumors. Some patients may also develop carcinoid tumors, adrenocortical tumors, meningiomas, facial angiofibromas, collagenomas, and lipomas. Patients with MEN1 have a decreased life expectancy, and the outcomes of current treatments, which are generally similar to those for the respective tumors occurring in non-MEN1 patients, are not as successful because of multiple tumors, which may be larger, more aggressive, and resistant to treatment, and the concurrence of metastases. The prognosis for MEN1 patients might be improved by presymptomatic tumor detection and undertaking treatment specific for MEN1 tumors. Thus, it is recommended that MEN1 patients and their families should be cared for by multidisciplinary teams comprising relevant specialists with experience in the diagnosis and treatment of patients with endocrine tumors.

Brian A Pace,  L Vallar,  A Spada … (1989)
A subset of growth hormone-secreting human pituitary tumours carries somatic mutations that inhibit GTPase activity of a G protein alpha chain, alpha(s). The resulting activation of adenylyl cyclase bypasses the cells' normal requirement for trophic hormone. Amino acids substituted in the putative gsp oncogene identify a domain of G protein alpha-chains required for intrinsic ability to hydrolyse GTP. This domain may serve as a built-in counter-part of the separate GTPase-activating proteins required for GTP hydrolysis by small GTP-binding proteins such as p21ras.