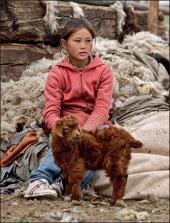 Bookmark
There is no author summary for this article yet. Authors can add summaries to their articles on ScienceOpen to make them more accessible to a non-specialist audience.
Despite a first rate system to detect and report epidemics, Mongolia is facing a concerning upsurge in infectious diseases. Sharmila Devi reports. Mongolia, which had not reported any case of coronavirus disease 2019 as of Feb 3, closed its vast border with China on Jan 31 to try to prevent the spread of the epidemic. The country also closed universities and educational institutes until March 2 and called for all public gatherings to be cancelled. However, apart from tcoronavirus disease 2019, Mongolia is currently battling other infectious diseases, such as respiratory and blood transmissible infections. The country, which is landlocked between Russia and China, has a population of about 3·2 million spread across an area equivalent to western and central Europe. “Mongolia was ranked 46 out of 195 countries in the 2019 Global Health Security Index”, Oyungerel Amgaa, Asia-Pacific health co-ordinator for the International Federation of Red Cross and Red Crescent Societies (IFRC), told The Lancet Infectious Diseases. The index is a joint project of the Johns Hopkins Centre for Health Security, the Nuclear Threat Initiative, and the Economist Intelligence Unit. “In terms of early detection and reporting of epidemics of potential international concern, Mongolia ranked 20th place, ahead of France. This is something that I see as a legacy of the socialist health system”, said Amgaa, who is herself Mongolian. “However, where the country is lagging behind is the capacity to respond effectively and in a timely fashion, ranking 90th place in the index for rapid response and mitigation of the spread of epidemics”. Registered cases of communicable diseases rose by 7.5% to 45 232 in 2019 compared with the previous year, according to data from the Mongolian National Centre for Health Development and provided by WHO. Of the total registered cases of communicable disease in 2019, 34·6% were respiratory infectious diseases, 34·6% were sexually transmitted infections (STIs), 20·3% were gastrointestinal diseases, 0·6% were zoonotic infections, 0·6% were blood transmitted-infections, and 4·4% were other infections. “Mongolia is a very large country, half the population lives in Ulaanbaatar and most of the rest are herders in remote areas who are difficult to reach”, said Amgaa. “Dzud [Mongolian term for icy winters that follow summer drought] means that herders move hundreds of kilometres from where they are registered and don’t have good access to healthcare.” This year, the Mongolian Red Cross Society is delivering cash assistance and livestock nutrition to 1000 vulnerable households in areas likely to be affected by severe dzud. Some 11 million animals, 20 per cent of the total, died in the 2010 dzud, wiping out the livelihoods of many families. The Mongolian government has been implementing a national control and prevention programme for communicable diseases. As a result, typhoid and polio had been eradicated, no cases of diphtheria, tetanus, and pertussis had been recently reported, and there was a steady decrease in the incidence of measles and hepatitis B. Mongolia has a high burden of viral hepatitis, with about one in ten people living with chronic hepatitis B and an estimated prevalence of between 6·4% and 11·1%. About one in 20 people live with chronic hepatitis C and its estimated prevalence is between 4·1 % and 8·5%. “Hepatitis originally spread among 40–50-year-olds because of the reuse of syringes in hospitals but now there are other reasons, including lack of hygiene and knowledge. With more vaccination, we should see containment”, said Amgaa. Tuberculosis is another major public health issue, with the incidence rate of all forms of the disease at 428 per 100 000 population, according to a survey conducted in 2012–16. This much higher than WHO's earlier estimation of 172 per 100 000, the organisation said. A total of 17 847 STI cases were reported in 2019, an increase of 1735 cases or 10·7% from 2018, mainly because of a screening campaign launched in July 2019, said WHO. Among other challenges facing the Mongolian health system is overuse of antibiotics. “The overuse can contribute toward the growing number of bacterial infections that are becoming resistant to antibacterial medications”, a UNICEF Mongolia spokesperson told The Lancet Infectious Diseases. “Since 2017 the antibiotics have been sold only with prescriptions.” Another challenge is boosting primary healthcare, said Amgaa. “Most of the healthcare budget goes on hospital-based and in-patient care and political will is needed to overhaul the system”, she said. Mongolia fell from an upper middle income country to a lower middle income country in 2016 as classified by the World Bank after fluctuations in the economy. Efforts to boost the economy and reduce poverty continue. Healthcare services that are free can be basic so many families have to make out-of-pocket payments for healthcare if they can afford it. In the light of the observed increase of communicable diseases, it is time for the Mongolian government to consider investing more in public health. © 2020 Flickr/Al Jazeera English 2020 Since January 2020 Elsevier has created a COVID-19 resource centre with free information in English and Mandarin on the novel coronavirus COVID-19. The COVID-19 resource centre is hosted on Elsevier Connect, the company's public news and information website. Elsevier hereby grants permission to make all its COVID-19-related research that is available on the COVID-19 resource centre - including this research content - immediately available in PubMed Central and other publicly funded repositories, such as the WHO COVID database with rights for unrestricted research re-use and analyses in any form or by any means with acknowledgement of the original source. These permissions are granted for free by Elsevier for as long as the COVID-19 resource centre remains active.