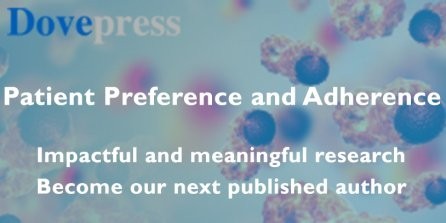 This international, peer-reviewed Open Access journal by Dove Medical Press focuses on the growing importance of patient preference and adherence throughout the therapeutic process. Sign up for email alerts here.

Adolescents with asthma often report poor medication adherence and asthma control. Cognitive factors embedded in the social cognitive theory including self-efficacy, outcome expectations, and barrier perceptions may explain poor asthma outcomes in this population. This study was performed to examine the extent to which these cognitive factors are intercorrelated and explain medication adherence and asthma control in urban adolescents.

Measurement properties and interpretation of three shortened versions of the asthma control questionnaire.

Elizabeth Juniper, Klas Svensson, Ann-Christin Mork … (2005)
The Asthma Control Questionnaire (ACQ) measures the adequacy of asthma treatment as identified by international guidelines. It consists of seven items (5 x symptoms, rescue bronchodilator use and FEV1% of predicted normal). A validation study suggested that in clinical studies measurement of FEV1 and bronchodilator use may not be needed but this has never formally been tested in a clinical trial. The aims of this analysis were (1) to examine the measurement properties of three shortened versions of the ACQ (symptoms alone, symptoms plus FEV1 and symptoms plus short-acting beta2-agonist) and (2) to determine whether using the shortened versions would alter the results of a clinical trial. In the randomised trial, 552 adults completed the ACQ at baseline and after 13 and 26 weeks of treatment. The analysis showed that the measurement properties of all four versions of the ACQ are very similar. Agreement between the original ACQ and the reduced versions was high (intraclass correlation coefficients: 0.94-0.99). Mean differences between the ACQ and the shortened versions were less than 0.04 (on the 7-point scale). Clinical trial results using the four versions were almost identical with the mean treatment difference ranging from -0.09 (P=0.17), to -0.13 (P=0.07). For interpretability, the minimal important difference for all four versions was close to 0.5. In conclusion, these three shortened versions of the ACQ can be used in large clinical trials without loss of validity or change in interpretation.

Development and validation of a questionnaire to measure asthma control.

Bradley R. King, Elizabeth Juniper, P Ferrie … (1999)
International guidelines on asthma management indicate that the primary goal of treatment should be optimum asthma control. The aim of this study was to develop and validate the Asthma Control Questionnaire (ACQ). The authors generated a list of all symptoms used to assess control and sent it to 100 asthma clinicians who were members of guidelines committees (18 countries). They scored each symptom for its importance in evaluating asthma control. From the 91 responses, the five highest scoring symptoms were selected for the ACQ. In addition, there is one question on beta2-agonist use and another on airway calibre (total questions=7). The ACQ was tested in a 9-week observational study of 50 adults with symptomatic asthma. The ACQ and other measures of asthma health status were assessed at baseline, 1, 5 and 9 weeks. In patients whose asthma was stable between clinic visits, reliability of the ACQ was high (intraclass correlation coefficient (ICC)=0.90). The questionnaire was very responsive to change in asthma control (p<0.0001). Cross-sectional and longitudinal validity were supported by correlations between the ACQ and other measures of asthma health status being close to a priori predictions. In conclusion, the Asthma Control Questionnaire has strong evaluative and discriminative properties and can be used with confidence to measure asthma control.

L Garbe, Christopher E. Moorman, Edward Sondik … (2009)
Centers for Disease Control and Prevention data were used to describe 1980-2007 trends among children 0 to 17 years of age and recent patterns according to gender, race, and age. Asthma period prevalence increased by 4.6% per year from 1980 to 1996. New measures introduced in 1997 show a plateau at historically high levels; 9.1% of US children (6.7 million) currently had asthma in 2007. Ambulatory care visit rates fluctuated during the 1990 s, whereas emergency department visits and hospitalization rates decreased slightly. Asthma-related death rates increased through the middle 1990 s but decreased after 1999. Recent data showed higher prevalence among older children (11-17 years), but the highest rates of asthma-related health care use were among the youngest children (0-4 years). After controlling for racial differences in prevalence, disparities in adverse outcomes remained; among children with asthma, non-Hispanic black children had greater risks for emergency department visits and death, compared with non-Hispanic white children. For hospitalizations, for which Hispanic ethnicity data were not available, black children had greater risk than white children. However, nonemergency ambulatory care use was lower for non-Hispanic black children. Although the large increases in childhood asthma prevalence have abated, the burden remains large. Potentially avoidable adverse outcomes and racial disparities continue to present challenges. These findings suggest the need for sustained asthma prevention and control efforts for children.