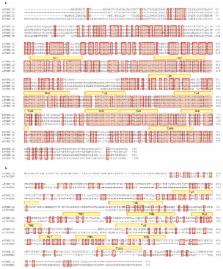 Structure of the TRPV1 ion channel determined by electron cryo-microscopy

Maofu Liao,  Erhu Cao,  David Julius … (2013)
Transient receptor potential (TRP) channels are sensors for a wide range of cellular and environmental signals, but elucidating how these channels respond to physical and chemical stimuli has been hampered by a lack of detailed structural information. Here, we exploit advances in electron cryo-microscopy to determine the structure of a mammalian TRP channel, TRPV1, at 3.4Å resolution, breaking the side-chain resolution barrier for membrane proteins without crystallization. Like voltage-gated channels, TRPV1 exhibits four-fold symmetry around a central ion pathway formed by transmembrane helices S5–S6 and the intervening pore loop, which is flanked by S1–S4 voltage sensor-like domains. TRPV1 has a wide extracellular ‘mouth’ with short selectivity filter. The conserved ‘TRP domain’ interacts with the S4–S5 linker, consistent with its contribution to allosteric modulation. Subunit organization is facilitated by interactions among cytoplasmic domains, including N-terminal ankyrin repeats. These observations provide a structural blueprint for understanding unique aspects of TRP channel function.