Evidence of In Vivo Existence of Borrelia Biofilm in Borrelial Lymphocytomas 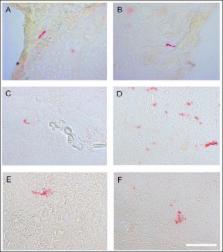 Lyme borreliosis, caused by the spirochete Borrelia burgdorferi sensu lato, has grown into a major public health problem. We recently identified a novel morphological form of B. burgdorferi, called biofilm, a structure that is well known to be highly resistant to antibiotics. However, there is no evidence of the existence of Borrelia biofilm in vivo; therefore, the main goal of this study was to determine the presence of Borrelia biofilm in infected human skin tissues. Archived skin biopsy tissues from borrelial lymphocytomas (BL) were reexamined for the presence of B. burgdorferi sensu lato using Borrelia-specific immunohistochemical staining (IHC), fluorescent in situ hybridization, combined fluorescent in situ hybridization (FISH)–IHC, polymerase chain reaction (PCR), and fluorescent and atomic force microscopy methods. Our morphological and histological analyses showed that significant amounts of Borrelia-positive spirochetes and aggregates exist in the BL tissues. Analyzing structures positive for Borrelia showed that aggregates, but not spirochetes, expressed biofilm markers such as protective layers of different mucopolysaccharides, especially alginate. Atomic force microscopy revealed additional hallmark biofilm features of the Borrelia/alginate-positive aggregates such as inside channels and surface protrusions. In summary, this is the first study that demonstrates the presence of Borrelia biofilm in human infected skin tissues.

Lisa Friedman,  Shild Vik,  Roberto Kolter … (2004)
Microbes often construct and live within surface-associated multicellular communities known as biofilms. The precise structure, chemistry and physiology of the biofilm all vary with the nature of its resident microbes and local environment. However, an important commonality among biofilms is that their structural integrity critically depends upon an extracellular matrix produced by their constituent cells. Extracellular matrices might be as diverse as biofilms, and they contribute significantly to the organization of the community. This review discusses recent advances in our understanding of the extracellular matrix and its role in biofilm biology.

A characterization of DNA release in Pseudomonas aeruginosa cultures and biofilms.

Thomas Bjarnsholt,  Niels Høiby,  Oana Ciofu (2010)
The persistence of chronic Pseudomonas aeruginosa lung infections in cystic fibrosis (CF) patients is due to biofilm-growing mucoid (alginate-producing) strains. A biofilm is a structured consortium of bacteria, embedded in a self-produced polymer matrix consisting of polysaccharide, protein and DNA. In CF lungs, the polysaccharide alginate is the major part of the P. aeruginosa biofilm matrix. Bacterial biofilms cause chronic infections because they show increased tolerance to antibiotics and resist phagocytosis, as well as other components of the innate and the adaptive immune system. As a consequence, a pronounced antibody response develops, leading to immune complex-mediated chronic inflammation, dominated by polymorphonuclear leukocytes. The chronic inflammation is the major cause of the lung tissue damage in CF. Biofilm growth in CF lungs is associated with an increased frequency of mutations, slow growth and adaptation of the bacteria to the conditions in the lungs, and to antibiotic therapy. Low bacterial metabolic activity and increase of doubling times of the bacterial cells in CF lungs are responsible for some of the tolerance to antibiotics. Conventional resistance mechanisms, such as chromosomal β-lactamase, upregulated efflux pumps, and mutations of antibiotic target molecules in the bacteria, also contribute to the survival of P. aeruginosa biofilms. Biofilms can be prevented by early aggressive antibiotic prophylaxis or therapy, and they can be treated by chronic suppressive therapy.

The authors have declared that no competing interest exists.