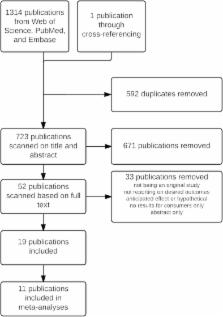 It has been hypothesised that direct-to-consumer genetic tests (DTC-GTs) could stimulate health behaviour change. However, genetic testing may also lead to anxiety and distress or unnecessarily burden the health care system. The aim is to review and meta-analyse the effects of DTC-GT on (1) behaviour change, (2) psychological response and (3) medical consumption. A systematic literature search was performed in three databases, using “direct-to-consumer genetic testing” as a key search term. Random effects meta-analyses were performed when at least two comparable outcomes were available. After selection, 19 articles were included involving 11 unique studies. Seven studies involved actual consumers who paid the retail price, whereas four included participants who received free genetic testing as part of a research trial (non-actual consumers). In meta-analysis, 23% had a positive lifestyle change. More specifically, improved dietary and exercise practices were both reported by 12%, whereas 19% quit smoking. Seven percent of participants had subsequent preventive checks. Thirty-three percent shared their results with any health care professional and 50% with family and/or friends. Sub-analyses show that behaviour change was more prevalent among non-actual consumers, whereas sharing was more prevalent among actual consumers. Results on psychological responses showed that anxiety, distress and worry were low or absent and that the effect faded with time. DTC-GT has potential to be effective as a health intervention, but the right audience needs to be addressed with tailored follow-up. Research is needed to identify consumers who do and do not change behaviour or experience adverse psychological responses.

C S Bloss,  N Schork,  Eric Topol (2011)
The use of direct-to-consumer genomewide profiling to assess disease risk is controversial, and little is known about the effect of this technology on consumers. We examined the psychological, behavioral, and clinical effects of risk scanning with the Navigenics Health Compass, a commercially available test of uncertain clinical validity and utility. We recruited subjects from health and technology companies who elected to purchase the Health Compass at a discounted rate. Subjects reported any changes in symptoms of anxiety, intake of dietary fat, and exercise behavior at a mean (±SD) of 5.6±2.4 months after testing, as compared with baseline, along with any test-related distress and the use of health-screening tests. From a cohort of 3639 enrolled subjects, 2037 completed follow-up. Primary analyses showed no significant differences between baseline and follow-up in anxiety symptoms (P=0.80), dietary fat intake (P=0.89), or exercise behavior (P=0.61). Secondary analyses revealed that test-related distress was positively correlated with the average estimated lifetime risk among all the assessed conditions (β=0.117, P<0.001). However, 90.3% of subjects who completed follow-up had scores indicating no test-related distress. There was no significant increase in the rate of use of screening tests associated with genomewide profiling, most of which are not considered appropriate for screening asymptomatic persons in any case. In a selected sample of subjects who completed follow-up after undergoing consumer genomewide testing, such testing did not result in any measurable short-term changes in psychological health, diet or exercise behavior, or use of screening tests. Potential effects of this type of genetic testing on the population at large are not known. (Funded by the National Institutes of Health and Scripps Health.).

The impact of communicating genetic risks of disease on risk-reducing health behaviour: systematic review with meta-analysis

Gareth J Hollands,  David French,  Simon Griffin … (2016)
Objective To assess the impact of communicating DNA based disease risk estimates on risk-reducing health behaviours and motivation to engage in such behaviours. Design Systematic review with meta-analysis, using Cochrane methods. Data sources Medline, Embase, PsycINFO, CINAHL, and the Cochrane Central Register of Controlled Trials up to 25 February 2015. Backward and forward citation searches were also conducted. Study selection Randomised and quasi-randomised controlled trials involving adults in which one group received personalised DNA based estimates of disease risk for conditions where risk could be reduced by behaviour change. Eligible studies included a measure of risk-reducing behaviour. Results We examined 10 515 abstracts and included 18 studies that reported on seven behavioural outcomes, including smoking cessation (six studies; n=2663), diet (seven studies; n=1784), and physical activity (six studies; n=1704). Meta-analysis revealed no significant effects of communicating DNA based risk estimates on smoking cessation (odds ratio 0.92, 95% confidence interval 0.63 to 1.35, P=0.67), diet (standardised mean difference 0.12, 95% confidence interval −0.00 to 0.24, P=0.05), or physical activity (standardised mean difference −0.03, 95% confidence interval −0.13 to 0.08, P=0.62). There were also no effects on any other behaviours (alcohol use, medication use, sun protection behaviours, and attendance at screening or behavioural support programmes) or on motivation to change behaviour, and no adverse effects, such as depression and anxiety. Subgroup analyses provided no clear evidence that communication of a risk-conferring genotype affected behaviour more than communication of the absence of such a genotype. However, studies were predominantly at high or unclear risk of bias, and evidence was typically of low quality. Conclusions Expectations that communicating DNA based risk estimates changes behaviour is not supported by existing evidence. These results do not support use of genetic testing or the search for risk-conferring gene variants for common complex diseases on the basis that they motivate risk-reducing behaviour. Systematic review registration This is a revised and updated version of a Cochrane review from 2010, adding 11 studies to the seven previously identified.