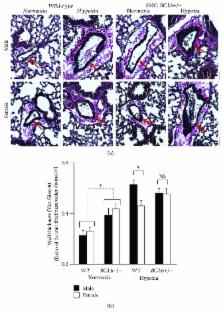 The “estrogen paradox” in pulmonary arterial hypertension (PAH) refers to observations that while there is a higher incidence of idiopathic PAH in women, rodent models of PAH show male dominance and estrogens are protective. To explain these differences, we previously proposed the neuroendocrine-STAT5-BCL6 hypothesis anchored in the sex-biased and species-specific patterns of growth hormone (GH) secretion by the pituitary, the targeting of the hypothalamus by estrogens to feminize GH secretion patterns, and the role of the transcription factors STAT5a/b and BCL6 as downstream mediators of this patterned GH-driven sex bias. As a test of this hypothesis, we previously reported that vascular smooth muscle cell- (SMC-) specific deletion of the STAT5a/b locus abrogated the male-dominant sex bias in the chronic hypoxia model of PAH in mice. In the present study, we confirmed reduced BCL6 expression in pulmonary arterial (PA) segments in both male and female SMC: STAT5a/b−/− mice. In order to test the proposed contribution of BCL6 to sex bias in PAH, we developed mice with SMC-specific deletion of BCL6+/− by crossing SM22 α-Cre mice with BCL6-floxed mice and investigated sex bias in these mutant mice in the chronic hypoxia model of PAH. We observed that the male-bias observed in wild-type- ( wt-) SM22 α- Cre-positive mice was abrogated in the SMC: BCL6+/− knockouts—both males and females showed equivalent enhancement of indices of PAH. The new data confirm BCL6 as a contributor to the sex-bias phenotype observed in hypoxic PAH in mice and support the neuroendocrine-STAT5-BCL6 hypothesis of sex bias in this experimental model of vascular disease.

Vallerie V McLaughlin,  Elvira Stacher,  Carlyne D. Cool … (2012)
The impact of modern treatments of pulmonary arterial hypertension (PAH) on pulmonary vascular pathology remains unknown. To assess the spectrum of pulmonary vascular remodeling in the modern era of PAH medication. Assessment of pulmonary vascular remodeling and inflammation in 62 PAH and 28 control explanted lungs systematically sampled. Intima and intima plus media fractional thicknesses of pulmonary arteries were increased in the PAH group versus the control lungs and correlated with pulmonary hemodynamic measurements. Despite a high variability of morphological measurements within a given PAH lung and among all PAH lungs, distinct pathological subphenotypes were detected in cohorts of PAH lungs. These included a subset of lungs lacking intima or, most prominently, media remodeling, which had similar numbers of profiles of plexiform lesions as those in lungs with more pronounced remodeling. Marked perivascular inflammation was present in a high number of PAH lungs and correlated with intima plus media remodeling. The number of profiles of plexiform lesions was significantly lower in lungs of male patients and those never treated with prostacyclin or its analogs. Our results indicate that multiple features of pulmonary vascular remodeling are present in patients treated with modern PAH therapies. Perivascular inflammation may have an important role in the processes of vascular remodeling, all of which may ultimately lead to increased pulmonary artery pressure. Moreover, our study provides a framework to interpret and design translational studies in PAH.

John C. Marecki,  V. Richter,  Sonia Flores … (2007)
The secondary role of pathology in the present clinical management of pulmonary hypertension (PH) reflects to some extent the limitations of the current understanding of the disease. Ample room exists for the diagnostic translation of the pathobiologic studies, with the goal of improving the diagnostic and prognostic power of the pathologic assessment of pulmonary vascular remodeling. This article seeks to show the complementarities of the pathology and pathobiology of PH.

Marlene Rabinovitch (2008)
Recent investigations have suggested that it might be possible to reverse the pathology of pulmonary arterial hypertension (PAH), a disorder that can be rapidly progressive and fatal despite current treatments including i.v. prostacyclin. This review will address the cellular and molecular processes implicated in clinical, genetic, and experimental studies as underlying the pulmonary vascular abnormalities associated with PAH. Emerging treatments are aimed at inducing apoptosis of abnormal vascular cells that obstruct blood flow and at promoting regeneration of "lost" distal vasculature.