Frequent respiratory events in postoperative patients aged 60 years and above 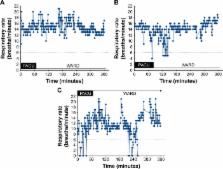 There is limited information on the occurrence of respiratory events in postoperative patients after discharge from the postanesthesia care unit. We studied the respiratory rate (RR) of 68 patients aged 60 years and above during the first 6 hours following elective surgery under general anesthesia to assess the frequency of respiratory events in the care unit and on the ward. RR was derived from the continuous RR counter RespiR8, measuring RR by quantifying the humidity of exhaled air. One-minute-averaged RRs were collected and analyzed to assess the frequency of postoperative bradypnea (RR 1–6 breaths/minute) and apnea (cessation of inspiratory flow ≥60 seconds). Values were median (interquartile range) or mean (SD). The median RR was 13 (10–15) breaths/minute. In the 6-hour postoperative period, 78% and 57% of patients experienced at least one bradypnea or apnea event, respectively. A median of ten (3.5–24) bradypnea and three (1–11) apnea events were detected per patient. The occurrence of respiratory events in the postanesthesia care unit (PACU) was a predictor of events on the ward (bradypnea, r 2=0.4, P<0.001; apnea, r 2=0.2, P<0.001). Morphine consumption correlated weakly with respiratory events in the PACU, but not on the ward. Patients with apnea had significantly larger neck circumference than patients without (39.6 [0.7] versus 37.4 [0.8] cm, P<0.05). Bradypneic or apneic respiratory events are frequent in postoperative elderly patients and even occur relatively late after surgery. Continuous respiratory monitoring on the ward, especially in patients with risk factors, such as early occurrence of events, opioid use, and larger neck circumference, is likely warranted.

Albert Dahan,  Leon Aarts,  George D W Smith (2009)
Opioid treatment of pain is generally safe with 0.5% or less events from respiratory depression. However, fatalities are regularly reported. The only treatment currently available to reverse opioid respiratory depression is by naloxone infusion. The efficacy of naloxone depends on its own pharmacological characteristics and on those (including receptor kinetics) of the opioid that needs reversal. Short elimination of naloxone and biophase equilibration half-lives and rapid receptor kinetics complicates reversal of high-affinity opioids. An opioid with high receptor affinity will require greater naloxone concentrations and/or a continuous infusion before reversal sets in compared with an opioid with lower receptor affinity. The clinical approach to severe opioid-induced respiratory depression is to titrate naloxone to effect and continue treatment by continuous infusion until chances for renarcotization have diminished. New approaches to prevent opioid respiratory depression without affecting analgesia have led to the experimental application of serotinine agonists, ampakines, and the antibiotic minocycline.

Neck circumference is a predictor of metabolic syndrome and obstructive sleep apnea in short-sleeping obese men and women.

Xiongce Zhao,  Eliane Lucassen,  Kristina I. Rother … (2014)
The constellation of metabolic syndrome, although controversial with regard to its clinical usefulness, is epidemiologically related to increased diabetes risk and cardiovascular mortality. Our goal was to investigate the associations among neck circumference (NC), obstructive sleep apnea syndromes (OSAS), and metabolic syndrome in obese men and women sleeping less than 6.5 hr per night. This was a cross-sectional study of obese men and premenopausal obese women sleeping less than 6.5 hr per night. We enrolled 120 individuals (92 women), age 40.5±6.9 years and body mass index (BMI) 38.6±6.5 kg/m(2). Metabolic syndrome severity was assessed by a score and OSAS was defined as a respiratory disturbance index (RDI) ≥5. Metabolic end endocrine parameters were measured, and sleep duration was determined by actigraphy and validated questionnaires. Metabolic syndrome was found in 41% and OSAS in 58% (28% had both). Subjects with metabolic syndrome were 3 years older and more often Caucasian; they had higher RDI scores, larger NC, more visceral fat, lower serum adiponectin, higher 24-hr urinary norepinephrine (NE) excretion, and lower growth hormone concentrations. A NC of ≥38 cm had a sensitivity of 54% and 58% and a specificity of 70% and 79% in predicting the presence of metabolic syndrome and OSAS, respectively. RDI, adiponectin, and NC accounted for approximately 30% of the variability in the metabolic syndrome score, as estimated by an age-, gender-, and race-corrected multivariate model (R(2)=0.376, P<0.001). Greater NC is associated with OSAS and metabolic syndrome in short-sleeping obese men and premenopausal obese women. Addition of NC to the definition of metabolic syndrome should be considered and needs to be validated in future studies.

Opioid-induced respiratory depression in paediatrics: a review of case reports.

Romain Dahan,  Hubert Niesters,  F Overdyk … (2013)
Opioids remain the cornerstone of modern-day pain treatment, also in the paediatric population. Opioid treatment is potentially life-threatening, although there are no numbers available on the incidence of opioid-induced respiratory depression (OIRD) in paediatrics. To get an indication of specific patterns in the development/causes of OIRD, we searched PubMed (May 2012) for all available case reports on OIRD in paediatrics, including patients 12 yr of age or younger who developed OIRD from an opioid given to them for a medical indication or due to transfer of an opioid from their mother in the perinatal setting, requiring naloxone, tracheal intubation, and/or resuscitation. Twenty-seven cases are described in 24 reports; of which, seven cases were fatal. In eight cases, OIRD was due to an iatrogenic overdose. Three distinct patterns in the remaining data set specifically related to OIRD include: (i) morphine administration in patients with renal impairment, causing accumulation of the active metabolite of morphine; (ii) codeine use in patients with CYP2D6 gene polymorphism associated with the ultra-rapid metabolizer phenotype, causing enhanced production of the morphine; and (iii) opioid use in patients after adenotonsillectomy for recurrent tonsillitis and/or obstructive sleep apnoea, where OIRD may be related to hypoxia-induced enhancement of OIRD. Despite the restrictions of this approach, our analysis does yield an important insight in the development of OIRD, with specific risk factors clearly present in the data.