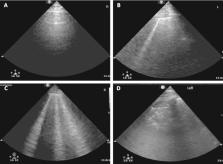 Information regarding the use of lung ultrasound (LUS) in patients with Coronavirus disease 2019 (COVID-19) is quickly accumulating, but its use for risk stratification and outcome prediction has yet to be described. We performed the first systematic and comprehensive LUS evaluation of consecutive patients hospitalized with COVID-19 infection, in order to describe LUS findings and their association with clinical course and outcome.

Between 21/03/2020 and 04/05/2020, 120 consecutive patients admitted to the Tel Aviv Medical Center due to COVID-19, underwent complete LUS within 24 h of admission. A second exam was performed in case of clinical deterioration. LUS score of 0 (best)—36 (worst) was assigned to each patient. LUS findings were compared with clinical data.

The median baseline total LUS score was 15, IQR [7–20]. Baseline LUS score was 0–18 in 80 (67%) patients, and 19–36 in 40 (33%) patients. The majority had patchy pleural thickening ( n = 100; 83%), or patchy subpleural consolidations ( n = 93; 78%) in at least one zone. The prevalence of pleural thickening, subpleural consolidations and the total LUS score were all correlated with severity of illness on admission. Clinical deterioration was associated with increased follow-up LUS scores ( p = 0.0009), mostly due to loss of aeration in anterior lung segments. The optimal cutoff point for LUS score was 18 (sensitivity = 62%, specificity = 74%). Both mortality and need for invasive mechanical ventilation were increased with baseline LUS score > 18 compared to baseline LUS score 0–18. Unadjusted hazard ratio of death for LUS score was 1.08 per point [1.02–1.16], p = 0.008; Unadjusted hazard ratio of the composite endpoint (death or need for invasive mechanical ventilation) for LUS score was 1.12 per point [1.05–1.2], p = 0.0008.

Hospitalized patients with COVID-19, at all clinical grades, present with pathological LUS findings. Baseline LUS score strongly correlates with the eventual need for invasive mechanical ventilation and is a strong predictor of mortality. Routine use of LUS may guide patients’ management strategies, as well as resource allocation in case of surge capacity.

Effect of a protective-ventilation strategy on mortality in the acute respiratory distress syndrome.

David Feller-Kopman,  Yannick Beaulieu,  Antoine Vieillard-Baron … (2009)
To define competence in critical care ultrasonography (CCUS). The statement is sponsored by the Critical Care NetWork of the American College of Chest Physicians (ACCP) in partnership with La Société de Réanimation de Langue Française (SRLF). The ACCP and the SRLF selected a panel of experts to review the field of CCUS and to develop a consensus statement on competence in CCUS. CCUS may be divided into general CCUS (thoracic, abdominal, and vascular), and echocardiography (basic and advanced). For each component part, the panel defined the specific skills that the intensivist should have to be competent in that aspect of CCUS. In defining a reasonable minimum standard for CCUS, the statement serves as a guide for the intensivist to follow in achieving proficiency in the field.