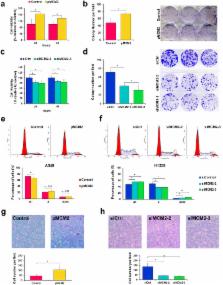 DNA replication control is vital for maintaining genome stability and the cell cycle, perhaps most notably during cell division. Malignancies often exhibit defective minichromosome maintenance protein 2 (MCM2), a cancer proliferation biomarker that serves as a licensing factor in the initiation of DNA replication. MCM2 is also known to be one of the ATPase active sites that facilitates conformational changes and drives DNA unwinding at the origin of DNA replication. However, the biological networks of MCM2 in lung cancer cells via protein phosphorylation remain unmapped. The RNA-seq datasets from The Cancer Genome Atlas (TCGA) revealed that MCM2 overexpression is correlated with poor survival rate in lung cancer patients. To uncover MCM2-regulated functional networks in lung cancer, we performed multi-dimensional proteomic approach by integrating analysis of the phosphoproteome and proteome, and identified a total of 2361 phosphorylation sites on 753 phosphoproteins, and 4672 proteins. We found that the deregulation of MCM2 is involved in lung cancer cell proliferation, the cell cycle, and migration. Furthermore, HMGA1 S99 phosphorylation was found to be differentially expressed under MCM2 perturbation in opposite directions, and plays an important role in regulating lung cancer cell proliferation. This study therefore enhances our capacity to therapeutically target cancer-specific phosphoproteins.

Gideon Dreyfuss,  Lili Wan,  David Cooper (2009)
Cellular functions depend on numerous protein-coding and noncoding RNAs and the RNA-binding proteins associated with them, which form ribonucleoprotein complexes (RNPs). Mutations that disrupt either the RNA or protein components of RNPs or the factors required for their assembly can be deleterious. Alternative splicing provides cells with an exquisite capacity to fine-tune their transcriptome and proteome in response to cues. Splicing depends on a complex code, numerous RNA-binding proteins, and an enormously intricate network of interactions among them, increasing the opportunity for exposure to mutations and misregulation that cause disease. The discovery of disease-causing mutations in RNAs is yielding a wealth of new therapeutic targets, and the growing understanding of RNA biology and chemistry is providing new RNA-based tools for developing therapeutics.

P Darwin Bell,  Anindya Dutta (2001)
The maintenance of the eukaryotic genome requires precisely coordinated replication of the entire genome each time a cell divides. To achieve this coordination, eukaryotic cells use an ordered series of steps to form several key protein assemblies at origins of replication. Recent studies have identified many of the protein components of these complexes and the time during the cell cycle they assemble at the origin. Interestingly, despite distinct differences in origin structure, the identity and order of assembly of eukaryotic replication factors is highly conserved across all species. This review describes our current understanding of these events and how they are coordinated with cell cycle progression. We focus on bringing together the results from different organisms to provide a coherent model of the events of initiation. We emphasize recent progress in determining the function of the different replication factors once they have been assembled at the origin.