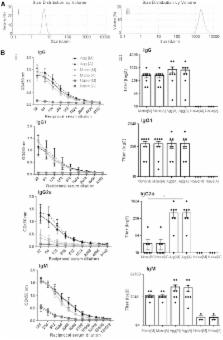 Protein aggregation is associated with enhanced immunogenicity of biotherapeutics. As a result, regulatory guidelines recommend screening for aggregation during bioprocessing. However, the mechanisms underlying the enhanced immunogenicity of aggregates are poorly understood. In the investigations described herein, the immunogenicity in mice of a humanized single chain variable antibody fragment (scFv) purified after expression in Escherichia coli has been examined. Reproducible scFv aggregates were obtained within the subvisible particle size range (mean diameter 2 µm) using thermal and mechanical stresses. Intraperitoneal immunization of BALB/c strain mice with 1 mg/ml of aggregated or monomeric scFv induced similar IgG and IgG1 antibody responses. In contrast, aggregate preparations stimulated significantly higher levels of anti-scFv IgG2a antibody than did the monomer. In comparative studies, aggregates of ovalbumin (OVA) within the subvisible particle size range were prepared by stir stress, and their immunogenicity compared with that of monomeric OVA in mice. Aggregated and monomeric OVA induced similar anti-OVA IgG and IgG1 antibody responses, whereas IgG2a antibody levels were significantly higher in aggregate-immunized mice. Furthermore, cytokine profiles in supernatants taken from splenocyte-dendritic cell co-cultures were consistent with aggregated preparations inducing a T helper (Th) 1-type response. Aggregated proteins within the subvisible range were therefore shown to induce a preferential Th1 type response, whereas monomeric proteins elicited a selective Th2 response. These data indicate that protein aggregation can impact on both the vigor and quality of immune responses.

Development of antidrug antibodies against adalimumab and association with disease activity and treatment failure during long-term follow-up.

Henry Lowman,  Napoleone Ferrara,  Naveed Shams … (2006)
Angiogenesis is a key aspect of the wet form of age-related neovascular (AMD), the leading cause of blindness in the elderly population. Substantial evidence indicated that vascular endothelial growth factor (VEGF)-A is a major mediator of angiogenesis and vascular leakage in wet AMD. VEGF-A is the prototype member of a gene family that includes also PlGF, VEGF-B, VEGF-C, VEGF-D and the orf virus-encoded VEGF-E. Several isoforms of VEGF-A can be generated due to alternative mRNA splicing. Various VEGF inhibitors have been clinically developed. Among these, ranibizumab is a high affinity recombinant Fab that neutralizes all isoforms of VEGF-A. The article briefly reviews the biology of VEGF and then focuses on the path that led to clinical development of ranibizumab. The safety and efficacy of ranibizumab in the treatment of neovascular AMD have been evaluated in two large phase III, multicenter, randomized, double-masked, controlled pivotal trials in different neovascular AMD patient populations. Combined, the trial results indicate that ranibizumab results not only in a slowing down of vision loss but also in a significant proportion of patients experiencing a clinically meaningful vision gain. The visual acuity benefit over control was observed regardless of CNV lesion type. Furthermore, the benefit was associated with a low rate of serious adverse events. Ranibizumab represents a novel therapy that, for the first time, appears to have the potential to enable many AMD patients to obtain a meaningful and sustained gain of vision. On June 30 2006, ranibizumab was approved by the US Food and Drug Administration for the treatment of wet AMD.

Daniel Otzen,  S Frokjaer (2005)
The increasing use of recombinantly expressed therapeutic proteins in the pharmaceutical industry has highlighted issues such as their stability during long-term storage and means of efficacious delivery that avoid adverse immunogenic side effects. Controlled chemical modifications, such as substitutions, acylation and PEGylation, have fulfilled some but not all of their promises, while hydrogels and lipid-based formulations could well be developed into generic delivery systems. Strategies to curb the aggregation and misfolding of proteins during storage are likely to benefit from the recent surge of interest in protein fibrillation. This might in turn lead to generally accepted guidelines and tests to avoid unforeseen adverse effects in drug delivery.