The complex origin of Astyanax cavefish 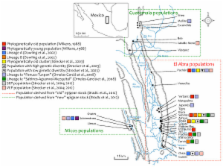 The loss of phenotypic characters is a common feature of evolution. Cave organisms provide excellent models for investigating the underlying patterns and processes governing the evolutionary loss of phenotypic traits. The blind Mexican cavefish, Astyanax mexicanus, represents a particularly strong model for both developmental and genetic analyses as these fish can be raised in the laboratory and hybridized with conspecific surface form counterparts to produce large F 2 pedigrees. As studies have begun to illuminate the genetic bases for trait evolution in these cavefish, it has become increasingly important to understand these phenotypic changes within the context of cavefish origins. Understanding these origins is a challenge. For instance, widespread convergence on similar features renders morphological characters less informative. In addition, current and past gene flow between surface and cave forms have complicated the delineation of particular cave populations.

Past population-level analyses have sought to: 1) estimate at what time in the geological past cave forms became isolated from surface-dwelling ancestors, 2) define the extent to which cave form populations originated from a common invasion (single origin hypothesis) or several invasions (multiple origin hypothesis), and 3) clarify the role of geological and climatic events in Astyanax cavefish evolution. In recent years, thanks to the combined use of morphological and genetic data, a much clearer picture has emerged regarding the origins of Astyanax cavefish.

The consensus view, based on several recent studies, is that cave forms originated from at least two distinct ancestral surface-dwelling stocks over the past several million years. In addition, each stock gave rise to multiple invasions of the subterranean biotope. The older stock is believed to have invaded the El Abra caves at least three times while the new stock separately invaded the northern Guatemala and western Micos caves. This renewed picture of Astyanax cavefish origins will help investigators draw conclusions regarding the evolution of phenotypic traits through parallelism versus convergence. Additionally, it will help us understand how the presence of cave-associated traits in old versus young cave populations may be influenced by the time since isolation in the cave environment. This will, in turn, help to inform our broader understanding of the forces that govern the evolution of phenotypic loss.

Genetic analysis of cavefish reveals molecular convergence in the evolution of albinism.

Richard L Borowsky,  Yi-Zhou Mei,  William Jeffery … (2005)
The genetic basis of vertebrate morphological evolution has traditionally been very difficult to examine in naturally occurring populations. Here we describe the generation of a genome-wide linkage map to allow quantitative trait analysis of evolutionarily derived morphologies in the Mexican cave tetra, a species that has, in a series of independent caves, repeatedly evolved specialized characteristics adapted to a unique and well-studied ecological environment. We focused on the trait of albinism and discovered that it is linked to Oca2, a known pigmentation gene, in two cave populations. We found different deletions in Oca2 in each population and, using a cell-based assay, showed that both cause loss of function of the corresponding protein, OCA2. Thus, the two cave populations evolved albinism independently, through similar mutational events.