Reproductive Intentions and Outcomes among Women on Antiretroviral Therapy in Rural Uganda: A Prospective Cohort Study 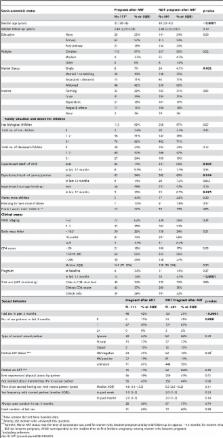 Antiretroviral therapy (ART) may influence the biological, social and behavioral determinants of pregnancy in HIV-infected women. However, there are limited longitudinal data on the reproductive intentions and outcomes among women on ART in Africa.

Using a prospective cohort design, we analyzed trends in desire for children and predictors of pregnancy among a cohort of 733 HIV-infected women in rural Uganda who initiated ART between May 2003 and May 2004 and were followed up in their homes until June 2006. Women answered in-depth social and behavioral questionnaires administered every quarter in year 1 after initiating ART, and every 6 to 12 months thereafter. Use of family planning methods was assessed at 18 and 24 months after starting ART. We tested for non-constant pregnancy incidence by using a shape parameter test from the Weibull distribution. We modeled repeated measurements of all variables related to the women's desire for children over time using a generalized estimating equation (GEE) extension to the logistic regression model. Risk factors for pregnancy were examined using Cox proportional hazards model. 711 women eligible for the study were followed-up for a median time of 2.4 years after starting ART. During this time, less than 7% of women reported wanting more children at any time point yet 120 (16.9%) women experienced 140 pregnancies and pregnancy incidence increased from 3.46 per 100 women-years (WY) in the first quarter to 9.5 per 100 WY at 24 months (p<0.0001). This was paralleled by an increase in the proportion of women reporting sexual activity in the past 3 months, from 24.4% at baseline to 32.5% over 24 months of follow-up (p = 0.001). Only 14% of women used permanent or semi-permanent family planning methods by their second year on ART. In the multivariate model, younger age (HR = 2.71 per 10-year decrease, 95% CI: 2.95–3.78), having a BMI>18.5 (HR = 1.09, CI: 1.01–1.18) and not having used condoms consistently in the last 3 months (HR = 1.79, CI: 1.02–3.13) were independently associated with pregnancy.

Women on ART and their partners should be consistently counseled on the effects of ART in restoring fertility, and offered regularly free and comprehensive family planning services as part of their standard package of care.

Regression Shrinkage and Selection Via the Lasso.

"Life is still going on": reproductive intentions among HIV-positive women and men in South Africa.

Landon Myer,  Virginia Zweigenthal,  Phyllis Orner … (2007)
This article reports on qualitative research investigating HIV positive individuals' reproductive intentions and their influencing factors in Cape Town, South Africa. In-depth interviews were held with 61 HIV positive women and men; at the time of interview, half had been receiving antiretroviral treatment (ART) for over 6 months and half were not receiving ART. Being HIV positive modified but did not remove reproductive desires, and diversity existed in reproductive intentions. Some HIV positive individuals wished to avoid pregnancy. Fears of partner and infant infection and having a previously infected baby were important factors deterring some individuals from considering having children. There was also strongly perceived community disapproval associated with HIV and reproduction. Strong desires to experience parenthood, mediated by prevailing social and cultural norms that encouraged childbearing in society more broadly, were reported by others. Motherhood was an important component of married women's identity and important for women's social status. Family, husbands' and societal expectations for childbearing were important influences on women's reproductive intentions, for some counterbalancing HIV as a factor discouraging reproduction. There was evidence that prevention of perinatal transmission programs in combination with ART may alter women and men's attitudes in favour of childbearing. Most HIV positive women had not discussed their reproductive desires and intentions with health care providers in HIV care or general health services because of anticipated negative reactions. The few who had done so perceived the counselling environment to be mostly unsupportive of open discussion on these issues. The findings highlight the need for explicit policies recognizing reproductive rights and choice. They support the need for health counselling and service interventions that advance safer and healthier reproductive options for HIV positive individuals in this region of the world which is experiencing a generalised and advanced HIV/AIDS pandemic.

Changes in sexual behavior and risk of HIV transmission after antiretroviral therapy and prevention interventions in rural Uganda.

John Ekwaru,  Alex Coutinho,  Jonathan Mermin … (2006)
The impact of antiretroviral therapy (ART) on sexual risk behavior and HIV transmission among HIV-infected persons in Africa is unknown. To assess changes in risky sexual behavior and estimated HIV transmission from HIV-infected adults after 6 months of ART. A prospective cohort study was performed in rural Uganda. Between May 2003 and December 2004 a total of 926 HIV-infected adults were enrolled and followed in a home-based ART program that included prevention counselling, voluntary counseling and testing (VCT) for cohabitating partners and condom provision. At baseline and follow-up, participants' HIV plasma viral load and partner-specific sexual behaviors were assessed. Risky sex was defined as inconsistent or no condom use with partners of HIV-negative or unknown serostatus in the previous 3 months. The rates of risky sex were compared using a Poisson regression model and transmission risk per partner was estimated, based on established viral load-specific transmission rates. Six months after initiating ART, risky sexual behavior reduced by 70% [adjusted risk ratio, 0.3; 95% confidence interval (CI), 0.2-0.7; P = 0.0017]. Over 85% of risky sexual acts occurred within married couples. At baseline, median viral load among those reporting risky sex was 122 500 copies/ml, and at follow-up, < 50 copies/ml. Estimated risk of HIV transmission from cohort members declined by 98%, from 45.7 to 0.9 per 1000 person years. Providing ART, prevention counseling, and partner VCT was associated with reduced sexual risk behavior and estimated risk of HIV transmission among HIV-infected Ugandan adults during the first 6 months of therapy. Integrated ART and prevention programs may reduce HIV transmission in Africa.

Publisher ID: 08-PONE-RA-06358R1
DOI: 10.1371/journal.pone.0004149
PMC ID: 2612743
PubMed ID: 19129911
Copyright statement: This is an open-access article distributed under the terms of the Creative Commons Public Domain declaration which stipulates that, once placed in the public domain, this work may be freely reproduced, distributed, transmitted, modified, built upon, or otherwise used by anyone for any lawful purpose.