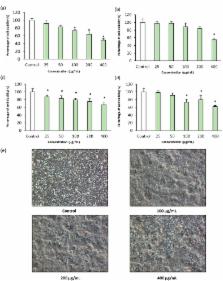 Actinobacteria from the unique intertidal ecosystem of the mangroves are known to produce novel, bioactive secondary metabolites. A novel strain known as MUSC 136 T (=DSM 100712 T = MCCC 1K01246 T) which was isolated from Malaysian mangrove forest soil has proven to be no exception. Assessed by a polyphasic approach, its taxonomy showed a range of phylogenetic and chemotaxonomic properties consistent with the genus of Streptomyces. Phylogenetically, highest similarity was to Streptomyces misionensis NBRC 13063 T (99.6%) along with two other strains (>98.9% sequence similarities). The DNA–DNA relatedness between MUSC 136 T and these type strains ranged from 22.7 ± 0.5% to 46.5 ± 0.2%. Overall, polyphasic approach studies indicated this strain represents a novel species, for which the name Streptomyces malaysiense sp. nov. is proposed. The potential bioactivities of this strain were explored by means of antioxidant and cytotoxic assays. Intriguingly, MUSC 136 T exhibited strong antioxidative activities as evaluated by a panel of antioxidant assays. It was also found to possess high cytotoxic effect against HCT-116 cells, which probably mediated through altering p53 protein and intracellular glutathione levels. Chemical analysis of the extract using GC-MS further affirms that the strain produces chemopreventive related metabolites.

Ok-Sun Kim, Yong-Joon Cho, Kihyun Lee … (2012)
Despite recent advances in commercially optimized identification systems, bacterial identification remains a challenging task in many routine microbiological laboratories, especially in situations where taxonomically novel isolates are involved. The 16S rRNA gene has been used extensively for this task when coupled with a well-curated database, such as EzTaxon, containing sequences of type strains of prokaryotic species with validly published names. Although the EzTaxon database has been widely used for routine identification of prokaryotic isolates, sequences from uncultured prokaryotes have not been considered. Here, the next generation database, named EzTaxon-e, is formally introduced. This new database covers not only species within the formal nomenclatural system but also phylotypes that may represent species in nature. In addition to an identification function based on Basic Local Alignment Search Tool (blast) searches and pairwise global sequence alignments, a new objective method of assessing the degree of completeness in sequencing is proposed. All sequences that are held in the EzTaxon-e database have been subjected to phylogenetic analysis and this has resulted in a complete hierarchical classification system. It is concluded that the EzTaxon-e database provides a useful taxonomic backbone for the identification of cultured and uncultured prokaryotes and offers a valuable means of communication among microbiologists who routinely encounter taxonomically novel isolates. The database and its analytical functions can be found at http://eztaxon-e.ezbiocloud.net/.