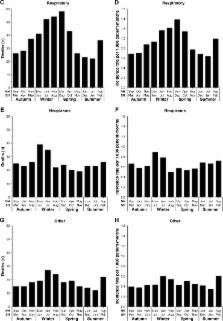 Although COPD exacerbations are known to occur more frequently in winter, there is little information on hospitalizations and cause-specific mortality. This study aimed to examine seasonal variations in mortality and exacerbations in patients with COPD during the TIOtropium Safety and Performance In Respimat ® (TIOSPIR ®) trial.

TIOSPIR was a large-scale, multicenter trial, which assessed the safety and efficacy of tiotropium delivered via HandiHaler ® (18 μg once daily) or Respimat ® Soft Mist™ (2.5 or 5 μg once daily) inhaler in patients with COPD. Patients were aged ≥40 years, with a smoking history ≥10 pack-years, and post-bronchodilator forced expiratory volume in 1 second ≤70% and forced expiratory volume in 1 second/forced vital capacity ≤0.70. COPD exacerbations and deaths were monitored throughout the trial. The data were pooled to examine seasonal patterns. Southern hemisphere data were shifted by 6 months to align with northern hemisphere seasons.

Although winter poses a 2-fold hazard for COPD exacerbations vs summer, respiratory deaths peak in early spring. These data suggest that seasonal intensification of preventive treatments may impact COPD morbidity and mortality.

Tiotropium Respimat inhaler and the risk of death in COPD.

Robert Wise,  Antonio Anzueto,  Daniel Cotton … (2013)
Tiotropium delivered at a dose of 5 μg with the Respimat inhaler showed efficacy similar to that of 18 μg of tiotropium delivered with the HandiHaler inhalation device in placebo-controlled trials involving patients with chronic obstructive pulmonary disease (COPD). Although tiotropium HandiHaler was associated with reduced mortality, as compared with placebo, more deaths were reported with tiotropium Respimat than with placebo.