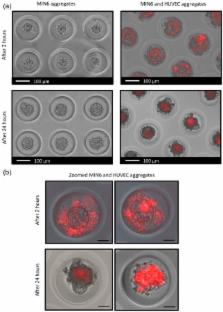 Composite aggregates of MIN6 cells with human umbilical vein endothelial cells have improved insulin secretion in comparison to MIN6 aggregates showing that the interaction of beta cell and endothelial cell is crucial for a functional encapsulation system.

Jin-Fei Chen,  Andrew H. Baldwin,  W. Gray Jerome … (2006)
To investigate molecular mechanisms controlling islet vascularization and revascularization after transplantation, we examined pancreatic expression of three families of angiogenic factors and their receptors in differentiating endocrine cells and adult islets. Using intravital lectin labeling, we demonstrated that development of islet microvasculature and establishment of islet blood flow occur concomitantly with islet morphogenesis. Our genetic data indicate that vascular endothelial growth factor (VEGF)-A is a major regulator of islet vascularization and revascularization of transplanted islets. In spite of normal pancreatic insulin content and beta-cell mass, mice with beta-cell-reduced VEGF-A expression had impaired glucose-stimulated insulin secretion. By vascular or diffusion delivery of beta-cell secretagogues to islets, we showed that reduced insulin output is not a result of beta-cell dysfunction but rather caused by vascular alterations in islets. Taken together, our data indicate that the microvasculature plays an integral role in islet function. Factors modulating VEGF-A expression may influence islet vascularity and, consequently, the amount of insulin delivered into the systemic circulation.

Marjan Rupnik,  Maša Skelin Klemen,  Avrelija Cencič (2009)
During the past 30 years great effort has been put into establishing an insulin-secreting beta cell line that retains normal regulation of insulin secretion, but only few of these attempts have been successful. To overcome the limited availability of primary beta cells and to include the principles of the 3Rs into the field of diabetes mellitus research, numerous investigators used X-rays or viruses to induce insulinomas, in vitro transformation, derivation of cells from transgenic mice or even non-islet cells to produce immortalised beta cell lines. The most widely used insulin-secreting cell lines are RIN, HIT, MIN, INS-1 and TC cells. These cells produce insulin and small amounts of glucagon and somatostatin. Some of them are only poorly responsive to glucose, others respond to glucose well, but their concentration-dependence curve is markedly shifted to higher sensitivity. Despite problems associated with beta cell cultures, these cell lines have provided some valuable information about physiological processes. However, an urgent need to establish a "normal" beta cell line of human or pig origin remains.