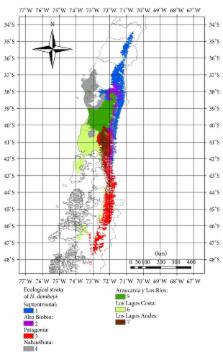 Within a woody plant species, environmental heterogeneity has the potential to influence the distribution of genetic variation among populations through several evolutionary processes. In some species, a relationship between environmental characteristics and the distribution of genotypes can be detected, showing the importance of natural selection as the main source of differentiation. Nothofagus dombeyi (Mirb.) Oerst. (Nothofagaceae) is an endemic tree species occurring both in Chile and in Argentina temperate forests. Postglacial history has been studied with chloroplast DNA and evolutionary forces shaping genetic variation patterns have been analysed with isozymes but fine-scale genetic diversity studies are needed. The study of demographic and selection histories in Nothofagus dombeyi requires more informative markers such as single nucleotide polymorphisms (SNP). Genotyping-by-Sequencing tools now allow studying thousands of SNP markers at reasonable prices in nonmodel species. We investigated more than 10 K SNP loci for signatures of local adaptation and showed that interrogation of genomic resources can identify shifts in genetic diversity and putative adaptive signals in this nonmodel woody species.

M. FRASER,  L. Bernatchez (2001)
Recent years have seen a debate over various methods that could objectively prioritize conservation value below the species level. Most prominent among these has been the evolutionarily significant unit (ESU). We reviewed ESU concepts with the aim of proposing a more unified concept that would reconcile opposing views. Like species concepts, conflicting ESU concepts are all essentially aiming to define the same thing: segments of species whose divergence can be measured or evaluated by putting differential emphasis on the role of evolutionary forces at varied temporal scales. Thus, differences between ESU concepts lie more in the criteria used to define the ESUs themselves rather than in their fundamental essence. We provide a context-based framework for delineating ESUs which circumvents much of this situation. Rather than embroil in a befuddled debate over an optimal criterion, the key to a solution is accepting that differing criteria will work more dynamically than others and can be used alone or in combination depending on the situation. These assertions constitute the impetus behind adaptive evolutionary conservation.

A spatial analysis method (SAM) to detect candidate loci for selection: towards a landscape genomics approach to adaptation.

Stéphane Joost,  A M Bonin,  M. W. Bruford … (2007)
The detection of adaptive loci in the genome is essential as it gives the possibility of understanding what proportion of a genome or which genes are being shaped by natural selection. Several statistical methods have been developed which make use of molecular data to reveal genomic regions under selection. In this paper, we propose an approach to address this issue from the environmental angle, in order to complement results obtained by population genetics. We introduce a new method to detect signatures of natural selection based on the application of spatial analysis, with the contribution of geographical information systems (GIS), environmental variables and molecular data. Multiple univariate logistic regressions were carried out to test for association between allelic frequencies at marker loci and environmental variables. This spatial analysis method (SAM) is similar to current population genomics approaches since it is designed to scan hundreds of markers to assess a putative association with hundreds of environmental variables. Here, by application to studies of pine weevils and breeds of sheep we demonstrate a strong correspondence between SAM results and those obtained using population genetics approaches. Statistical signals were found that associate loci with environmental parameters, and these loci behave atypically in comparison with the theoretical distribution for neutral loci. The contribution of this new tool is not only to permit the identification of loci under selection but also to establish hypotheses about ecological factors that could exert the selection pressure responsible. In the future, such an approach may accelerate the process of hunting for functional genes at the population level.

Pierre Taberlet,  François Pompanon,  Claude Miaud … (2007)
In conservation biology genetic diversity is recognized as an important criterion to consider when prioritizing populations for protection. Today, population genomics offers the opportunity to evaluate both neutral and adaptive components of genetic diversity directly at the genome level with molecular tools. By screening the genome with many genetic markers, it is possible to detect loci supposedly under natural selection and thus of adaptive significance. We devised a new diversity index, the population adaptive index (PAI), which accounts for the adaptive value of the population it refers to. To estimate this index, we performed a genome scan with amplified fragment length polymorphism markers to identify neutral and selected loci in several populations of a widespread amphibian (common frog, Rana temporaria) and a threatened plant (Austrian dragonhead, Dracocephalum austriacum L.). We then investigated four different conservation strategies aimed at protecting the maximum amount of genetic diversity (neutral or selected). In particular we explored the relevance of the principle of complementarity, usually applied to the protection of species, in the management of intraspecific diversity. This principle advocates the conservation of sets of units that together maximize the species' or genetic diversity, which is in opposition to the traditional approach of targeting populations that are the most diverse individually. Four major conclusions emerged from these results. First, the PAI seemed to be a valuable index to evaluate the adaptive diversities within populations. Second, in the two species, the neutral and adaptive diversities within and among populations were not correlated, so conservation strategies based on the neutral and adaptive indexes would not select the same populations for protection. Third, because of its efficiency in conserving genetic diversity, the principle of complementarity deserves to be used more often for this purpose. Fourth, when neutral and adaptive results conflict, additional arguments (e.g., demography, ecology, and geographic proximity) should be considered together with levels of genetic diversity to determine a conservation strategy.