RNA-Seq Analysis of Allele-Specific Expression, Hybrid Effects, and Regulatory Divergence in Hybrids Compared with Their Parents from Natural Populations 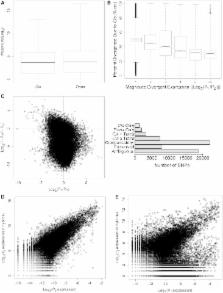 Hybridization is a prominent process among natural plant populations that can result in phenotypic novelty, heterosis, and changes in gene expression. The effects of intraspecific hybridization on F 1 hybrid gene expression were investigated using parents from divergent, natural populations of Cirsium arvense, an invasive Compositae weed. Using an RNA-seq approach, the expression of 68,746 unigenes was quantified in parents and hybrids. The expression levels of 51% of transcripts differed between parents, a majority of which had less than 1.25× fold-changes. More unigenes had higher expression in the invasive parent ( P 1) than the noninvasive parent ( P 2). Of those that were divergently expressed between parents, 10% showed additive and 81% showed nonadditive (transgressive or dominant) modes of gene action in the hybrids. A majority of the dominant cases had P 2-like expression patterns in the hybrids. Comparisons of allele-specific expression also enabled a survey of cis- and trans-regulatory effects. Cis- and trans-regulatory divergence was found at 70% and 68% of 62,281 informative single-nucleotide polymorphism sites, respectively. Of the 17% of sites exhibiting both cis- and trans-effects, a majority (70%) had antagonistic regulatory interactions ( cis x trans); trans-divergence tended to drive higher expression of the P 1 allele, whereas cis-divergence tended to increase P 2 transcript abundance. Trans-effects correlated more highly than cis with parental expression divergence and accounted for a greater proportion of the regulatory divergence at sites with additive compared with nonadditive inheritance patterns. This study explores the nature of, and types of mechanisms underlying, expression changes that occur in upon intraspecific hybridization in natural populations.

Mark Robinson, Gordon K. Smyth (2007)
Digital gene expression (DGE) technologies measure gene expression by counting sequence tags. They are sensitive technologies for measuring gene expression on a genomic scale, without the need for prior knowledge of the genome sequence. As the cost of sequencing DNA decreases, the number of DGE datasets is expected to grow dramatically. Various tests of differential expression have been proposed for replicated DGE data using binomial, Poisson, negative binomial or pseudo-likelihood (PL) models for the counts, but none of the these are usable when the number of replicates is very small. We develop tests using the negative binomial distribution to model overdispersion relative to the Poisson, and use conditional weighted likelihood to moderate the level of overdispersion across genes. Not only is our strategy applicable even with the smallest number of libraries, but it also proves to be more powerful than previous strategies when more libraries are available. The methodology is equally applicable to other counting technologies, such as proteomic spectral counts. An R package can be accessed from http://bioinf.wehi.edu.au/resources/

Phenotypic and genetic differentiation between native and introduced plant populations.

Oliver Bossdorf, Harald Auge, Lucile Lafuma … (2005)
Plant invasions often involve rapid evolutionary change. Founder effects, hybridization, and adaptation to novel environments cause genetic differentiation between native and introduced populations and may contribute to the success of invaders. An influential idea in this context has been the Evolution of Increased Competitive Ability (EICA) hypothesis. It proposes that after enemy release plants rapidly evolve to be less defended but more competitive, thereby increasing plant vigour in introduced populations. To detect evolutionary change in invaders, comparative studies of native versus introduced populations are needed. Here, we review the current empirical evidence from: (1) comparisons of phenotypic variation in natural populations; (2) comparisons of molecular variation with neutral genetic markers; (3) comparisons of quantitative genetic variation in a common environment; and (4) comparisons of phenotypic plasticity across different environments. Field data suggest that increased vigour and reduced herbivory are common in introduced plant populations. In molecular studies, the genetic diversity of introduced populations was not consistently different from that of native populations. Multiple introductions of invasive plants appear to be the rule rather than the exception. In tests of the EICA hypothesis in a common environment, several found increased growth or decreased resistance in introduced populations. However, few provided a full test of the EICA hypothesis by addressing growth and defence in the same species. Overall, there is reasonable empirical evidence to suggest that genetic differentiation through rapid evolutionary change is important in plant invasions. We discuss conceptual and methodological issues associated with cross-continental comparisons and make recommendations for future research. When testing for EICA, greater emphasis should be put on competitive ability and plant tolerance. Moreover, it is important to address evolutionary change in characteristics other than defence and growth that could play a role in plant invasions.

This is an Open Access article distributed under the terms of the Creative Commons Attribution Non-Commercial License ( http://creativecommons.org/licenses/by-nc/3.0/), which permits non-commercial re-use, distribution, and reproduction in any medium, provided the original work is properly cited. For commercial re-use, please contact journals.permissions@oup.com