Shrews (Soricidae) of the lowland forests around Kisangani (DR Congo) 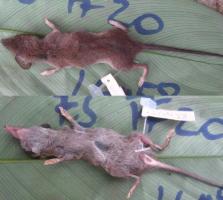 The Congo Basin rainforest is the second largest rainforest in the world and one of the most biodiverse regions on Earth. Nevertheless, the Congo Basin biodiversity remains to be fully mapped, with many species awaiting discovery or official description. In recent years, much effort has been put into research on shrews ( Soricidae ), particularly in the region around Kisangani (D.R. Congo). Shrews are opportunistic feeders that are able to forage on a large diversity of invertebrate prey and therefore play an important role in the forest ecosystem. Furthermore, as they largely depend on forest habitats and have limited dispersal capacities, shrews form an interesting model group to study biogeographic patterns in the Congo Basin.

This paper collates the efforts on shrew research from the wider region around Kisangani, in the centre of the Congo Basin. Apart from sampling information, the dataset includes morphological measures, DNA sequences and photographs. This dataset is therefore critical in the study of the taxonomy and ecology of Soricidae in the Congo Basin lowland rainforests.

Luke Gibson,  Tien Ming Lee,  Lian Koh … (2011)
Human-driven land-use changes increasingly threaten biodiversity, particularly in tropical forests where both species diversity and human pressures on natural environments are high. The rapid conversion of tropical forests for agriculture, timber production and other uses has generated vast, human-dominated landscapes with potentially dire consequences for tropical biodiversity. Today, few truly undisturbed tropical forests exist, whereas those degraded by repeated logging and fires, as well as secondary and plantation forests, are rapidly expanding. Here we provide a global assessment of the impact of disturbance and land conversion on biodiversity in tropical forests using a meta-analysis of 138 studies. We analysed 2,220 pairwise comparisons of biodiversity values in primary forests (with little or no human disturbance) and disturbed forests. We found that biodiversity values were substantially lower in degraded forests, but that this varied considerably by geographic region, taxonomic group, ecological metric and disturbance type. Even after partly accounting for confounding colonization and succession effects due to the composition of surrounding habitats, isolation and time since disturbance, we find that most forms of forest degradation have an overwhelmingly detrimental effect on tropical biodiversity. Our results clearly indicate that when it comes to maintaining tropical biodiversity, there is no substitute for primary forests.

C Mittermeier,  Vera Fonseca,  T. Brooks … (2003)
Human pressure threatens many species and ecosystems, so conservation efforts necessarily prioritize saving them. However, conservation should clearly be proactive wherever possible. In this article, we assess the biodiversity conservation value, and specifically the irreplaceability in terms of species endemism, of those of the planet's ecosystems that remain intact. We find that 24 wilderness areas, all > or = 1 million hectares, are > or = 70% intact and have human densities of less than or equal to five people per km2. This wilderness covers 44% of all land but is inhabited by only 3% of people. Given this sparse population, wilderness conservation is cost-effective, especially if ecosystem service value is incorporated. Soberingly, however, most wilderness is not speciose: only 18% of plants and 10% of terrestrial vertebrates are endemic to individual wildernesses, the majority restricted to Amazonia, Congo, New Guinea, the Miombo-Mopane woodlands, and the North American deserts. Global conservation strategy must target these five wildernesses while continuing to prioritize threatened biodiversity hotspots.

Amanda L Lewis,  Simon Lewis (2006)
Tropical forests are global epicentres of biodiversity and important modulators of the rate of climate change. Recent research on deforestation rates and ecological changes within intact forests, both areas of recent research and debate, are reviewed, and the implications for biodiversity (species loss) and climate change (via the global carbon cycle) addressed. Recent impacts have most likely been: (i) a large source of carbon to the atmosphere, and major loss of species, from deforestation and (ii) a large carbon sink within remaining intact forest, accompanied by accelerating forest dynamism and widespread biodiversity changes. Finally, I look to the future, suggesting that the current carbon sink in intact forests is unlikely to continue, and that the tropical forest biome may even become a large net source of carbon, via one or more of four plausible routes: changing photosynthesis and respiration rates, biodiversity changes in intact forest, widespread forest collapse via drought, and widespread forest collapse via fire. Each of these scenarios risks potentially dangerous positive feedbacks with the climate system that could dramatically accelerate and intensify climate change. Given that continued land-use change alone is already thought to be causing the sixth mass extinction event in Earth's history, should such feedbacks occur, the resulting biodiversity and societal consequences would be even more severe.