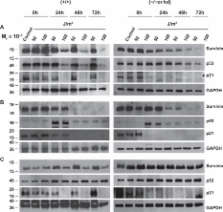 Subcellular distribution of the apoptosis inhibitor survivin and its ability to relocalize as a result of cell cycle phase or therapeutic insult has led to the hypothesis that these subcellular pools may coincide with different survivin functions. The PIK kinases (ATM, ATR and DNA-PK) phosphorylate a variety of effector substrates that propagate DNA damage signals, resulting in various biological outputs. Here we demonstrate that subcellular repartitioning of survivin in MCF-7 cells as a result of UV light-mediated DNA damage is dependent upon DNA damage-sensing proteins as treatment with the pan PIK kinase inhibitor wortmannin repartitioned survivin in the mitochondria and diminished it from the cytosol and nucleus. Mitochondrial redistribution of survivin, such as was recorded after wortmannin treatment, occurred in cells lacking any one of the three DNA damage sensing protein kinases: DNA-PK, ATM or ATR. However, failed survivin redistribution from the mitochondria in response to low-dose UV occurred only in the cells lacking ATM, implying that ATM may be the primary kinase involved in this process. Taken together, this data implicates survivian’s subcellular distribution is a dynamic physiological process that appears responsive to UV light-initiated DNA damage and that its distribution may be responsible for its multifunctionality.

Jiping Zha,  Hisashi Harada,  Elizabeth Yang … (1996)
Extracellular survival factors alter a cell's susceptibility to apoptosis, often through posttranslational mechanisms. However, no consistent relationship has been established between such survival signals and the BCL-2 family, where the balance of death agonists versus antagonists determines susceptibility. One distant member, BAD, heterodimerizes with BCL-X(L) or BCL-2, neutralizing their protective effect and promoting cell death. In the presence of survival factor IL-3, cells phosphorylated BAD on two serine residues embedded in 14-3-3 consensus binding sites. Only the nonphosphorylated BAD heterodimerized with BCL-X(L) at membrane sites to promote cell death. Phosphorylated BAD was sequestered in the cytosol bound to 14-3-3. Substitution of serine phosphorylation sites further enhanced BAD's death-promoting activity. The rapid phosphorylation of BAD following IL-3 connects a proximal survival signal with the BCL-2 family, modulating this checkpoint for apoptosis.

Control of apoptosis and mitotic spindle checkpoint by survivin.

Jenny E. Chu,  Dario C. Altieri,  G Ambrosini … (1998)
Progression of the cell cycle and control of apoptosis (programmed cell death) are thought to be intimately linked processes, acting to preserve homeostasis and developmental morphogenesis. Although proteins that regulate apoptosis have been implicated in restraining cell-cycle entry and controlling ploidy (chromosome number), the effector molecules at the interface between cell proliferation and cell survival have remained elusive. Here we show that a new inhibitor of apoptosis (IAP) protein, survivin, is expressed in the G2/M phase of the cell cycle in a cycle-regulated manner. At the beginning of mitosis, survivin associates with microtubules of the mitotic spindle in a specific and saturable reaction that is regulated by microtubule dynamics. Disruption of survivin-microtubule interactions results in loss of survivin's anti-apoptosis function and increased caspase-3 activity, a mechanism involved in cell death, during mitosis. These results indicate that survivin may counteract a default induction of apoptosis in G2/M phase. The overexpression of survivin in cancer may overcome this apoptotic checkpoint and favour aberrant progression of transformed cells through mitosis.

BCL-2 is phosphorylated and inactivated by an ASK1/Jun N-terminal protein kinase pathway normally activated at G(2)/M.

K. Yamamoto,  Stanley Korsmeyer,  Hidenori ICHIJO (1999)
Multiple signal transduction pathways are capable of modifying BCL-2 family members to reset susceptibility to apoptosis. We used two-dimensional peptide mapping and sequencing to identify three residues (Ser70, Ser87, and Thr69) within the unstructured loop of BCL-2 that were phosphorylated in response to microtubule-damaging agents, which also arrest cells at G(2)/M. Changing these sites to alanine conferred more antiapoptotic activity on BCL-2 following physiologic death signals as well as paclitaxel, indicating that phosphorylation is inactivating. An examination of cycling cells enriched by elutriation for distinct phases of the cell cycle revealed that BCL-2 was phosphorylated at the G(2)/M phase of the cell cycle. G(2)/M-phase cells proved more susceptible to death signals, and phosphorylation of BCL-2 appeared to be responsible, as a Ser70Ala substitution restored resistance to apoptosis. We noted that ASK1 and JNK1 were normally activated at G(2)/M phase, and JNK was capable of phosphorylating BCL-2. Expression of a series of wild-type and dominant-negative kinases indicated an ASK1/Jun N-terminal protein kinase 1 (JNK1) pathway phosphorylated BCL-2 in vivo. Moreover, the combination of dominant negative ASK1, (dnASK1), dnMKK7, and dnJNK1 inhibited paclitaxel-induced BCL-2 phosphorylation. Thus, stress response kinases phosphorylate BCL-2 during cell cycle progression as a normal physiologic process to inactivate BCL-2 at G(2)/M.