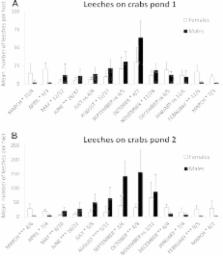 The South African leech Marsupiobdella africana is a temporary ectoparasite of the amphibian Xenopus laevis, has a phoretic association with a freshwater crab Potamonautes perlatus, and exhibits advanced parental care by incubating its offspring in a brood pouch. Because phoretic associations are usually regarded to favor the phoront’s dispersion, its occurrence within the biology of a parasitic species reflects an intimate context of interactions. In addition to phoresy, attachment to the crab may confer other advantages pertaining to offspring development and predator avoidance, dispersion and the parasitic life cycle. Two ponds where amphibian and crab hosts co-occur were sampled twice a month for a period of 1 year. The population dynamics of the leeches and their use of specific microhabitats as attachment sites on the crabs were also investigated. Results indicate a direct relationship between intra-specific variation in the sex ratio among captured crab hosts and the number of leeches recruited over time. The attachments to specific microhabitats on the hard surfaces of the host suggest a proximal proximate anti-predatory strategy. Finally, the importance of oxygen accessibility for the offspring development has been investigated experimentally. Results revealed a remarkable network of interactions linking all partners of this system raising the question as to whether the crabs merely act as a vehicle or play a role within the parasitic life cycle.

PHORESY AS MIGRATION - SOME FUNCTIONAL ASPECTS OF PHORESY IN MITES

Phylogeny of the leech family Glossiphoniidae based on mitochondrial gene sequences and morphological data.

Katrina J Light,  Mark E Siddall (1999)
The phylogenetic relationships of the Glossiphoniidae (Rhynchobdellida) were investigated using morphological characters and the mitochondrial genes cytochrome c oxidase subunit I and nicotinamide adenine dinucleotide dehydrogenase subunit 1. Thirty-five taxa representing 10 of the 23 currently recognized glossiphoniid genera were sampled, including more than 70% of known North American species, as well as others from Europe, South America, Africa, and a species endemic to Lake Baikal. Outgroup taxa included species from the Piscicolidae and Ozobranchidae. Cladistic analysis resulted in 1 most-parsimonious tree. Subfamily distinctions, i.e., Haementeriinae, Theromyzinae, and Glossiphoniinae, that have been based on eye morphology and reproductive biology are not corroborated. Results also provide insights into several problematic genus-level classifications. For example, relationships of Placobdella and Haementeria are clarified and elimination of Desserobdella may be necessary. Bloodfeeding from vertebrates is seen to be a primitive characteristic that has been lost twice within the clade. The hypothesis that the biannulate leech, Oligobdella biannulata, represents an important transitional form is re-evaluated in a phylogenetic context.

Phylogeny of leeches (Hirudinea) based on mitochondrial cytochrome c oxidase subunit I.

E Burreson,  O'Rita Siddall (1998)
The phylogenetic relationships of leeches were investigated for the first time using molecular data. Twenty-one species were examined representing 7 of the 10 conventionally recognized euhirudinean families. In addition, Acanthobdella peledina, a branchiobdellid, four oligochaetes, and two polychaetes were included. Cladistic analysis of the mitochondrial cytochrome c oxidase subunit I gene yielded one most-parsimonious tree. Contemporary taxonomic groupings of leeches into higher categories were found to be largely consistent with monophyletic groups identified in the analysis. Unusual relationships for which there is some precedent include a sister-group relationship between the piscicolids and Arhynchobdellida, as well as the grouping of the haemopids within Hirudinidae.

This is an open-access article distributed under the terms of the Creative Commons Attribution-NonCommercial-No Derivative Works License, which permits non-commercial use, distribution, and reproduction in any medium, provided the original author and source are credited.