Ecology, biology and distribution of spotted-fever tick vectors in Brazil 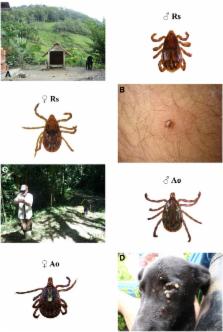 Spotted-fever-caused Rickettsia rickettsii infection is in Brazil the major tick-borne zoonotic disease. Recently, a second and milder human rickettsiosis caused by an agent genetically related to R. parkeri was discovered in the country (Atlantic rainforest strain). Both diseases clearly have an ecological background linked to a few tick species and their environment. Capybaras ( Hydrochoerus hydrochaeris) and Amblyomma cajennense ticks in urban and rural areas close to water sources are the main and long-known epidemiological feature behind R. rickettsii-caused spotted-fever. Unfortunately, this ecological background seems to be increasing in the country and disease spreading may be foreseen. Metropolitan area of São Paulo, the most populous of the country, is embedded in Atlantic rainforest that harbors another important R. rickettsii vector, the tick Amblyomma aureolatum. Thus, at the city–forest interface, dogs carry infected ticks to human dwellings and human infection occurs. A role for R. rickettsii vectoring to humans of a third tick species, Rhipicephalus sanguineus in Brazil, has not been proven; however, there is circumstantial evidence for that. A R. parkeri-like strain was found in A. ovale ticks from Atlantic rainforest and was shown to be responsible for a milder febrile human disease. Rickettsia-infected A. ovale ticks are known to be spread over large areas along the Atlantic coast of the country, and diagnosis of human infection is increasing with awareness and proper diagnostic tools. In this review, ecological features of the tick species mentioned, and that are important for Rickettsia transmission to humans, are updated and discussed. Specific knowledge gaps in the epidemiology of such diseases are highlighted to guide forthcoming research.

Ecology of rickettsia in South America.

Marcelo B Labruna (2009)
Until the year 2000, only three Rickettsia species were known in South America: (i) Rickettsia rickettsii, transmitted by the ticks Amblyomma cajennense, and Amblyomma aureolatum, reported in Colombia, Argentina, and Brazil, where it is the etiological agent of Rocky Mountain spotted fever; (ii) Rickettsia prowazekii, transmitted by body lice and causing epidemic typhus in highland areas, mainly in Peru; (iii) Rickettsia typhi, transmitted by fleas and causing endemic typhus in many countries. During this new century, at least seven other rickettsiae were reported in South America: Rickettsia felis infecting fleas and the tick-associated agents Rickettsia parkeri, Rickettsia massiliae, Candidatus"Rickettsia amblyommii,"Rickettsia bellii, Rickettsia rhipicephali, and Candidatus"Rickettsia andeanae." Among these other rickettsiae, only R. felis, R. parkeri, and R. massiliae are currently recognized as human pathogens. R. rickettsii is a rare agent in nature, infecting < or =1% individuals in a few tick populations. Contrastingly, R. parkeri, Candidatus"R. amblyommii," R. rhipicephali, and R. bellii are usually found infecting 10 to 100% individuals in different tick populations. Despite rickettsiae being transmitted transovarially through tick generations, low infection rates for R. rickettsii are possibly related to pathogenic effect of R. rickettsii for ticks, as shown for A. aureolatum under laboratory conditions. This scenario implies that R. rickettsii needs amplifier vertebrate hosts for its perpetuation in nature, in order to create new lines of infected ticks (horizontal transmission). In Brazil, capybaras and opossums are the most probable amplifier hosts for R. rickettsii, among A. cajennense ticks, and small rodents for A. aureolatum.