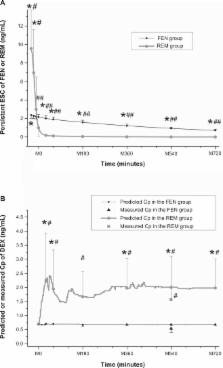 Fourteen patients undergoing surgery for abdominal aortic aneurysms (AAA) were randomly, double-blindly assigned to two groups and underwent fentanyl- or remifentanil-based anesthetic management. DEX TCI was started at the time of closing the peritoneum and continued for 12 hours after stopping propofol administration (M0); DEX TCI was adjusted according to the sedation score and complaints of pain. The doses and concentrations of all anesthetics and postoperative conditions were investigated.

The effects of increasing plasma concentrations of dexmedetomidine in humans.

Thomas Ebert,  Judith Hall,  Jill A. Barney … (2000)
This study determined the responses to increasing plasma concentrations of dexmedetomidine in humans. Ten healthy men (20-27 yr) provided informed consent and were monitored (underwent electrocardiography, measured arterial, central venous [CVP] and pulmonary artery [PAP] pressures, cardiac output, oxygen saturation, end-tidal carbon dioxide [ETCO2], respiration, blood gas, and catecholamines). Hemodynamic measurements, blood sampling, and psychometric, cold pressor, and baroreflex tests were performed at rest and during sequential 40-min intravenous target infusions of dexmedetomidine (0.5, 0.8, 1.2, 2.0, 3.2, 5.0, and 8.0 ng/ml; baroreflex testing only at 0.5 and 0.8 ng/ml). The initial dose of dexmedetomidine decreased catecholamines 45-76% and eliminated the norepinephrine increase that was seen during the cold pressor test. Catecholamine suppression persisted in subsequent infusions. The first two doses of dexmedetomidine increased sedation 38 and 65%, and lowered mean arterial pressure by 13%, but did not change central venous pressure or pulmonary artery pressure. Subsequent higher doses increased sedation, all pressures, and calculated vascular resistance, and resulted in significant decreases in heart rate, cardiac output, and stroke volume. Recall and recognition decreased at a dose of more than 0.7 ng/ml. The pain rating and mean arterial pressure increase to cold pressor test progressively diminished as the dexmedetomidine dose increased. The baroreflex heart rate slowing as a result of phenylephrine challenge was potentiated at both doses of dexmedetomidine. Respiratory variables were minimally changed during infusions, whereas acid-base was unchanged. Increasing concentrations of dexmedetomidine in humans resulted in progressive increases in sedation and analgesia, decreases in heart rate, cardiac output, and memory. A biphasic (low, then high) dose-response relation for mean arterial pressure, pulmonary arterial pressure, and vascular resistances, and an attenuation of the cold pressor response also were observed.

T M Savege,  Zachary B. Simpson,  M Ramsay … (1974)
Alphaxalone-alphadolone (Althesin), diluted and administered as a controlled infusion, was used as a sedative for 30 patients in an intensive therapy unit. This technique allowed rapid and accurate control of the level of sedation. It had three particularly useful applications: it provided "light sleep," allowed rapid variation in the level of sedation, and enabled repeated assessment of the central nervous system.Sedation was satisfactory for 86% of the total time, and no serious complications were attributed to the use of the drug. Furthermore, though alphaxalone-alphadolone was given for periods up to 20 days there was no evidence of tachyphylaxis or delay in recovery time.