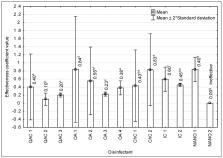 The aim of this study was to compare the biocidal effectiveness of disinfectants solutions prepared with ozonated and non-ozonated water against Listeria monocytogenes. Six L. monocytogenes strains were the research material (four isolates from food: meat (LMO-M), dairy products (LMO-N), vegetables (LMO-W), and fish (LMO-R); one clinical strain (LMO-K) and reference strain ATCC 19111). The evaluation of the biocidal effectiveness of disinfectant solutions (QAC—quaternary ammonium compounds; OA—oxidizing agents; ChC—chlorine compounds; IC—iodine compounds; NANO—nanoparticles) was carried out, marking the MBC values. Based on the obtained results, the effectiveness coefficient (A) were calculated. The smaller the A value, the greater the efficiency of disinfection solutions prepared on the basis of ozonated versus non-ozonated water. Ozonated water showed biocidal efficacy against L. monocytogenes. Among tested disinfectentants, independent on type of water used for preparation, the most effective against L. monocytogenes were: QAC 1 (benzyl-C12-18-alkydimethyl ammonium chlorides) (1.00 × 10 −5–1.00 × 10 −4 g/mL) in quaternary ammonium compounds, OA 3 (peracetic acid, hydrogen peroxide, bis (sulphate) bis (peroxymonosulfate)) (3.08 × 10 −4 –3.70 × 10 −3 g/mL) in oxidizing agents, ChC 1 (chlorine dioxide) (5.00 × 10 −8 –7.00 × 10 −7 g/mL) in chlorine compounds, IC 1 (iodine) (1.05–2.15 g/mL) in iodine compounds, and NANO 1 (nanocopper) (1.08 × 10 −4 – 1.47 × 10 −4 g/mL) in nanoparticles. The values of the activity coefficient for QAC ranged from 0.10 to 0.40, for OA—0.15–0.84, for ChC—0.25–0.83, for IC—0.45–0.60, and for NANO—0.70–0.84. The preparation of disinfectants solution on the basis of ozonated water, improved the microbicidal efficiency of the tested disinfectant, especially the quaternary ammonium compounds. An innovative element of our work is the use of ozonated water for the preparation of working solutions of the disinfection agents. Use ozonated water can help to reduce the use of disinfectant concentrations and limit the increasing of microbial resistance to disinfectants. This paper provides many new information to optimize hygiene plans in food processing plants and limit the spread of microorganisms such as L. monocytogenes.

A. Elvis,  J. Ekta (2011)
Ozone (O3) gas discovered in the mid-nineteenth century is a molecule consisting of three atoms of oxygen in a dynamically unstable structure due to the presence of mesomeric states. Although O3 has dangerous effects, yet researchers believe it has many therapeutic effects. Ozone therapy has been utilized and heavily studied for more than a century. Its effects are proven, consistent, safe and with minimal and preventable side effects. Medical O3 is used to disinfect and treat disease. Mechanism of actions is by inactivation of bacteria, viruses, fungi, yeast and protozoa, stimulation of oxygen metabolism, activation of the immune system. Medication forms in a gaseous state are somewhat unusual, and it is for this reason that special application techniques have had to be developed for the safe use of O3. In local applications as in the treatment of external wounds, its application in the form of a transcutaneous O3 gas bath has established itself as being the most practical and useful method, for example at low (sub-atmospheric) pressure in a closed system guaranteeing no escape of O3 into the surrounding air. Ozonized water, whose use is particularly known in dental medicine, is optimally applied as a spray or compress. Diseases treated are infected wounds, circulatory disorders, geriatric conditions, macular degeneration, viral diseases, rheumatism/arthritis, cancer, SARS and AIDS.

Microbiological Aspects of Ozone Applications in Food: A Review

Characteristics and distribution of Listeria spp., including Listeria species newly described since 2009

Renato Orsi,  Martin Wiedmann (2016)
The genus Listeria is currently comprised of 17 species, including 9 Listeria species newly described since 2009. Genomic and phenotypic data clearly define a distinct group of six species (Listeria sensu strictu) that share common phenotypic characteristics (e.g., ability to grow at low temperature, flagellar motility); this group includes the pathogen Listeria monocytogenes. The other 11 species (Listeria sensu lato) represent three distinct monophyletic groups, which may warrant recognition as separate genera. These three proposed genera do not contain pathogens, are non-motile (except for Listeria grayi), are able to reduce nitrate (except for Listeria floridensis), and are negative for the Voges-Proskauer test (except for L. grayi). Unlike all other Listeria species, species in the proposed new genus Mesolisteria are not able to grow below 7 °C. While most new Listeria species have only been identified in a few countries, the availability of molecular tools for rapid characterization of putative Listeria isolates will likely lead to future identification of isolates representing these new species from different sources. Identification of Listeria sensu lato isolates has not only allowed for a better understanding of the evolution of Listeria and virulence characteristics in Listeria but also has practical implications as detection of Listeria species is often used by the food industry as a marker to detect conditions that allow for presence, growth, and persistence of L. monocytogenes. This review will provide a comprehensive critical summary of our current understanding of the characteristics and distribution of the new Listeria species with a focus on Listeria sensu lato.