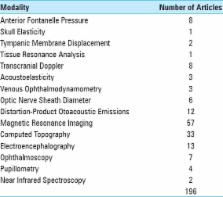 Intracranial pressure (ICP) monitoring is important in many neurosurgical and neurological patients. The gold standard for monitoring ICP, however, is via an invasive procedure resulting in the placement of an intraventricular catheter, which is associated with many risks. Several noninvasive ICP monitoring techniques have been examined with the hope to replace the invasive techniques. The goal of this paper is to provide an overview of all modalities that have been used for noninvasive ICP monitoring to date.

A thorough literature search was conducted on PubMed, selected articles were reviewed in completion, and pertinent data was included in the review.

A total of 94 publications were reviewed, and we found that over the past few decades clinicians have attempted to use a number of modalities to monitor ICP noninvasively.

Although the intraventricular catheter remains the gold standard for monitoring ICP, several noninvasive modalities that can be used in settings when invasive monitoring is not possible are also available. In our opinion, measurement of optic nerve sheath diameter and pupillometry are the two modalities which may prove to be valid options for centers not performing invasive ICP monitoring.

R Aaslid,  T Markwalder,  H Nornes (1982)
In this report the authors describe a noninvasive transcranial method of determining the flow velocities in the basal cerebral arteries. Placement of the probe of a range-gated ultrasound Doppler instrument in the temporal area just above the zygomatic arch allowed the velocities in the middle cerebral artery (MCA) to be determined from the Doppler signals. The flow velocities in the proximal anterior (ACA) and posterior (PCA) cerebral arteries were also recorded at steady state and during test compression of the common carotid arteries. An investigation of 50 healthy subjects by this transcranial Doppler method revealed that the velocity in the MCA, ACA, and PCA was 62 +/- 12, 51 +/0 12, and 44 +/- 11 cm/sec, respectively. This method is of particular value for the detection of vasospasm following subarachnoid hemorrhage and for evaluating the cerebral circulation in occlusive disease of the carotid and vertebral arteries.

B Mokri (2001)
More than two centuries ago, Alexander Monro applied some of the principles of physics to the intracranial contents and for the first time hypothesized that the blood circulating in the cranium was of constant volume at all times. This hypothesis was supported by experiments by Kellie. In its original form, the hypothesis had shortcomings that prompted modification by others. What finally came to be known as the Monro-Kellie doctrine, or hypothesis, is that the sum of volumes of brain, CSF, and intracranial blood is constant. An increase in one should cause a decrease in one or both of the remaining two. This hypothesis has substantial theoretical implications in increased intracranial pressure and in decreased CSF volume. Many of the MRI abnormalities seen in intracranial hypotension or CSF volume depletion can be explained by the Monro-Kellie hypothesis. These abnormalities include meningeal enhancement, subdural fluid collections, engorgement of cerebral venous sinuses, prominence of the spinal epidural venous plexus, and enlargement of the pituitary gland.