Effect of RpoN, RpoS and LuxS Pathways on the Biofilm Formation and Antibiotic Sensitivity of Borrelia Burgdorferi 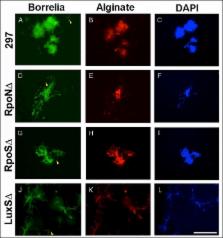 Borrelia burgdorferi, the causative agent of Lyme disease, is capable of forming biofilm in vivo and in vitro, a structure well known for its resistance to antimicrobial agents. For the formation of biofilm, signaling processes are required to communicate with the surrounding environment such as it was shown for the RpoN–RpoS alternative sigma factor and for the LuxS quorum-sensing pathways. Therefore, in this study, the wild-type B. burgdorferi and different mutant strains lacking RpoN, RpoS, and LuxS genes were studied for their growth characteristic and development of biofilm structures and markers as well as for their antibiotic sensitivity. Our results showed that all three mutants formed small, loosely formed aggregates, which expressed previously identified Borrelia biofilm markers such as alginate, extracellular DNA, and calcium. All three mutants had significantly different sensitivity to doxycyline in the early log phase spirochete cultures; however, in the biofilm rich stationary cultures, only LuxS mutant showed increased sensitivity to doxycyline compared to the wild-type strain. Our findings indicate that all three mutants have some effect on Borrelia biofilm, but the most dramatic effect was found with LuxS mutant, suggesting that the quorum-sensing pathway plays an important role of Borrelia biofilm formation and antibiotic sensitivity.

C Waters,  Bonnie Bassler (2004)
Bacteria communicate with one another using chemical signal molecules. As in higher organisms, the information supplied by these molecules is critical for synchronizing the activities of large groups of cells. In bacteria, chemical communication involves producing, releasing, detecting, and responding to small hormone-like molecules termed autoinducers . This process, termed quorum sensing, allows bacteria to monitor the environment for other bacteria and to alter behavior on a population-wide scale in response to changes in the number and/or species present in a community. Most quorum-sensing-controlled processes are unproductive when undertaken by an individual bacterium acting alone but become beneficial when carried out simultaneously by a large number of cells. Thus, quorum sensing confuses the distinction between prokaryotes and eukaryotes because it enables bacteria to act as multicellular organisms. This review focuses on the architectures of bacterial chemical communication networks; how chemical information is integrated, processed, and transduced to control gene expression; how intra- and interspecies cell-cell communication is accomplished; and the intriguing possibility of prokaryote-eukaryote cross-communication.

How bacteria talk to each other: regulation of gene expression by quorum sensing.

Bonnie Bassler (1999)
Quorum sensing, or the control of gene expression in response to cell density, is used by both gram-negative and gram-positive bacteria to regulate a variety of physiological functions. In all cases, quorum sensing involves the production and detection of extracellular signalling molecules called autoinducers. While universal signalling themes exist, variations in the design of the extracellular signals, the signal detection apparatuses, and the biochemical mechanisms of signal relay have allowed quorum sensing systems to be exquisitely adapted for their varied uses. Recent studies show that quorum sensing modulates both intra- and inter-species cell-cell communication, and it plays a major role in enabling bacteria to architect complex community structures.

The LuxS family of bacterial autoinducers: biosynthesis of a novel quorum-sensing signal molecule.

S Schauder,  K Shokat,  Bonnie Bassler … (2001)
Many bacteria control gene expression in response to cell population density, and this phenomenon is called quorum sensing. In Gram-negative bacteria, quorum sensing typically involves the production, release and detection of acylated homoserine lactone signalling molecules called autoinducers. Vibrio harveyi, a Gram-negative bioluminescent marine bacterium, regulates light production in response to two distinct autoinducers (AI-1 and AI-2). AI-1 is a homoserine lactone. The structure of AI-2 is not known. We have suggested previously that V. harveyi uses AI-1 for intraspecies communication and AI-2 for interspecies communication. Consistent with this idea, we have shown that many species of Gram-negative and Gram-positive bacteria produce AI-2 and, in every case, production of AI-2 is dependent on the function encoded by the luxS gene. We show here that LuxS is the AI-2 synthase and that AI-2 is produced from S-adenosylmethionine in three enzymatic steps. The substrate for LuxS is S-ribosylhomocysteine, which is cleaved to form two products, one of which is homocysteine, and the other is AI-2. In this report, we also provide evidence that the biosynthetic pathway and biochemical intermediates in AI-2 biosynthesis are identical in Escherichia coli, Salmonella typhimurium, V. harveyi, Vibrio cholerae and Enterococcus faecalis. This result suggests that, unlike quorum sensing via the family of related homoserine lactone autoinducers, AI-2 is a unique, 'universal' signal that could be used by a variety of bacteria for communication among and between species.

Funding sources: This work was supported by grants from the University of New Haven, Tom Crawford’s Leadership Children Foundation, National Philanthropic Trust, Alyssa Wartman Funds to ES, and postgraduate fellowship from NH Charitable Foundation to PAST.