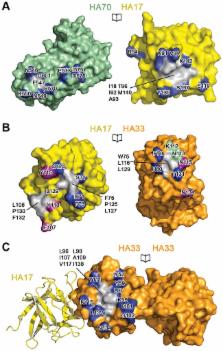 Botulinum neurotoxins (BoNTs) are produced by Clostridium botulinum and cause the fatal disease botulism, a flaccid paralysis of the muscle. BoNTs are released together with several auxiliary proteins as progenitor toxin complexes (PTCs) to become highly potent oral poisons. Here, we report the structure of a ∼760 kDa 14-subunit large PTC of serotype A (L-PTC/A) and reveal insight into its absorption mechanism. Using a combination of X-ray crystallography, electron microscopy, and functional studies, we found that L-PTC/A consists of two structurally and functionally independent sub-complexes. A hetero-dimeric 290 kDa complex protects BoNT, while a hetero-dodecameric 470 kDa complex facilitates its absorption in the harsh environment of the gastrointestinal tract. BoNT absorption is mediated by nine glycan-binding sites on the dodecameric sub-complex that forms multivalent interactions with carbohydrate receptors on intestinal epithelial cells. We identified monosaccharides that blocked oral BoNT intoxication in mice, which suggests a new strategy for the development of preventive countermeasures for BoNTs based on carbohydrate receptor mimicry.

Food-borne botulinum neurotoxin (BoNT) poisoning results in fatal muscle paralysis. But how can BoNT–a large protein released by the bacteria clostridia–survive the hostile gastrointestinal (GI) tract to gain access to neurons that control muscle contraction? Here, we report the complete structure of a bimodular ∼760 kDa BoNT/A large progenitor toxin complex (L-PTC), which is composed of BoNT and four non-toxic bacterial proteins. The architecture of this bacterial machinery mimics an Apollo lunar module, whereby the “ascent stage” (a ∼290 kDa module) protects BoNT from destruction in the GI tract and the 3-arm “descent stage” (a ∼470 kDa module) mediates absorption of BoNT by binding to host carbohydrate receptors in the small intestine. This new finding has helped us identify the carbohydrate-binding sites and the monosaccharide IPTG as a prototypical oral inhibitor, which extends survival following lethal BoNT/A intoxication of mice. Hence, pre-treatment with small molecule inhibitors based on carbohydrate receptor mimicry can provide temporary protection against BoNT entry into the circulation.

Eric F. Pettersen,  Thomas Goddard,  Conrad Huang … (2004)
The design, implementation, and capabilities of an extensible visualization system, UCSF Chimera, are discussed. Chimera is segmented into a core that provides basic services and visualization, and extensions that provide most higher level functionality. This architecture ensures that the extension mechanism satisfies the demands of outside developers who wish to incorporate new features. Two unusual extensions are presented: Multiscale, which adds the ability to visualize large-scale molecular assemblies such as viral coats, and Collaboratory, which allows researchers to share a Chimera session interactively despite being at separate locales. Other extensions include Multalign Viewer, for showing multiple sequence alignments and associated structures; ViewDock, for screening docked ligand orientations; Movie, for replaying molecular dynamics trajectories; and Volume Viewer, for display and analysis of volumetric data. A discussion of the usage of Chimera in real-world situations is given, along with anticipated future directions. Chimera includes full user documentation, is free to academic and nonprofit users, and is available for Microsoft Windows, Linux, Apple Mac OS X, SGI IRIX, and HP Tru64 Unix from http://www.cgl.ucsf.edu/chimera/. Copyright 2004 Wiley Periodicals, Inc.

This work was supported in part by National Institute of Allergy and Infectious Diseases (NIAID) grants (5R01AI091823 to RJ and U54 AI065359 to LWC), by the Deutsche Forschungsgemeinschaft (DFG Exzellenzinitiative GSC 108 to TTNL), by the Swiss Federal Office for Civil Protection (BABS #353003325 to AR), and by the United States Department of Agriculture CRIS project (5325-42000-048-00D to LWC). NE-CAT at the Advanced Photon Source (APS) is supported by grants from the National Center for Research Resources (NCRR, 5P41RR015301-10), the National Institute of General Medical Sciences (NIGMS, 8 P41 GM103403-10), and the U.S. Department of Energy (DOE, DE-AC02-06CH11357). Stanford Synchrotron Radiation Lightsource is supported by the DOE Office of Biological and Environmental Research, the NIGMS (including P41GM103393), and the NCRR (P41RR001209). We acknowledge the use of the EM facility at the Electron Imaging Center for NanoMachines supported by NIH (1S10RR23057 to Dr. Z. Hong Zhou) at UCLA, and the UCSD Cryo-EM Facility, which is supported by NIH grants to Dr. Timothy S. Baker and a gift from the Agouron Institute to UCSD. Publication charges were supported in part by the Deutsche Forschungsgemeinschaft DFG in the framework of the program “Open Access Publishing” at Medizinische Hochschule Hannover. The funders had no role in study design, data collection and analysis, decision to publish, or preparation of the manuscript.